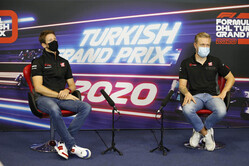 Romain Grosjean and Kevin Magnussen are both looking to race in IndyCar after losing their seats at Haas.

However, while the Dane admits that securing a seat for 2021 is looking unlikely, Grosjean admits that making the move will depend on how it affects his family life.

"I need to definitely have something done in IndyCar to decide if I'm going to decide to travel back and forth or completely travel there," said Grosjean, who lives in Switzerland. "I've got a wife and three kids, and it's not like I was a youngster that can just jump in a plane with a backpack and not look behind me. Obviously there are some considerations there.

"The pros of IndyCar is everyone pretty much has the same cars apart from the dampers and two types of engines," he continued, "the races are pretty fun, there's good opportunities to win the race or to be on a podium.

"It's a very good championship and I think there's more pros than cons but obviously the lifestyle and where we live and what we do with the kids and their education and their future is very high on the priority list," he admitted.

"Some of the teams are fully booked, but there are opportunities left," he said. "Looking at what we can do, how we can do it, I think there are some wish from both sides to make it happen, which is nice, and some good challenges.

"If you look at Penske or Chip Ganassi, which I guess are the two top teams, they're fully booked, but you would not necessarily expect to land on one of those seats for the first year going to IndyCar. I think you need to prove you can race in that series."

"I've been speaking with teams and seeing what is possible," said Magnussen. "We're a little bit late in the year, so a lot of teams have already got drivers for the future, I don't think it looks likely for next year for sure.

"IndyCar is something very high on my list and I've always been a fan," he continued. "I'd love to try it, it's a challenge that I'd really get really excited about, a lot of new things.

"I've always found oval tracks to be something that I think is spectacular, very different to what I've ever done in my career, we don't really do ovals in Europe. The road courses out there are fantastic as well, really old school, and the thing about the cars being very similar is also a very good thing.

"That means you can make a bigger difference as a driver, my dad has been racing in America for about twenty years and I've spent a lot of time there, I really like being in America, I think that would suit me pretty well."

Haas has yet to reveal who will replace the pair in 2021.