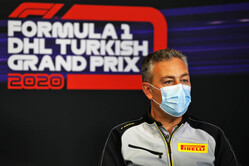 Can we start with our first impressions of the Istanbul Park circuit. We've just had the first practice session, it looked pretty slippy out there - so what conclusions can we draw?
Guenther Steiner: I would agree with you: it was very slippy but I think the track wasn't used for a while and there was some damp patches and it was pretty cold with the Hard tyres, so, end of the session, seems to be getting a little better when you can get some temperature in the tyres - but I think we wait for FP2. Otherwise, it's a great place as a circuit here, it's in very good shape, it's just like we need to get a little bit more grip and then it will be alright.

Toto?
Toto Wolff: I think we haven't been here for a long time and the circuit put a lot of effort into resurfacing and that is good. The consequences, obviously there is a lot of bitumen coming out and that makes it very slippery. As Guenther said, I think we just need to run and run and run and eventually the grip levels are going to increase - maybe not to the levels we know - but we need a little bit more rally skills in order to go fast tomorrow. It's different to what we had.

Mario, from Pirelli's point of view?
Mario Isola: Toto is right: we have a level of grip that is lower than expected. When we selected the tyres, we didn't know about this idea of the circuit resurface, all the track, so the characteristics of the new tarmac are different from the old one. That means that we decided for the three hardest compounds we have in our range. It's a bit challenging for drivers but they're all the same tyres and at the end they have to work with what they have. I believe it is quite difficult if it is going to rain because of the bitumen and the fact that you have some oil that is coming on the surface when it is raining, so we have to pay attention if, in one of the next days, if it will be wet. About the rest, probably the level of grip will increase. We don't have support events here so obviously the level of rubber we are able to put down on track is less than usual and this is another element they have to consider in strategies and track evolution.

Mario, knowing what you know now, might you have brought softer compounds to this race?
MI: Maybe yes - but we have data that are very, very old. Ten years ago we had a completely different situation, different tyres, different compounds and different cars, so we are looking at this circuit as a new track. We made our simulation considering this circuit as a new track and yes, obviously we had a look at the data from 2011 but I believe they are not very relevant, so maybe yes. We know that Turn 8 is quite severe on the tyre. The rest of the circuit is not so heavy, so severe on tyres. Knowing the characteristics of the tarmac in advance, yes, maybe it was good to go one step softer.

Mario, staying with you and throwing it two weeks back if I may, what update can you give us regarding the failure on Max Verstappen's car at Imola?
MI: We made an investigation on the tyre and the part of the tyre that we have been able to collect. We found some cuts on the tread and the sidewall, both in inside and outside. We believe that the reason of the failure was damage on the centre of the tread that caused the damage on both the belts and the carcass plies. So the belts started to detach following this damage and at a certain point, when the carcass was not able to keep the load, we had the deflation that everybody saw on television. We shared the analysis with the FIA and the team and this is the evidence that we have. Obviously it is difficult to analyse a tyre that is in pieces but we sent immediately the tyre back from Imola to our laboratories in Milan and we did an investigation as a priority.

Thank you. And going a week earlier, if I may, to Portimao, the Portuguese Grand Prix, what conclusions did you draw from the tyre test that you carried out there during FP2, and what changes to the tyres can we expect for 2021?
MI: We have decided to homologate a new front and a new rear construction. The new front is the one with the biggest difference compared to this year, with the different profile, a different construction. We carry over the compounds to next year. Obviously it is impossible in one test to redesign all the range of compounds but we have this new specification. We are going to supply the new specification to all the teams in Bahrain and probably Abu Dhabi. We are discussing this in these days, to give all the teams the possibility to test the final - the homologated - version of this specification. Because in Portimao we supplied different prototypes to different teams, not the same to everybody, so not all the teams have been able to test what we have decided to homologate, so that is the plan for the next events. Obviously, I am talking about the first race in Bahrain on a layout that is well-known by the teams and the race in Abu Dhabi, again on a layout that is very well known.

Toto, Lewis has his first match-point this weekend. Have you seen any sign of nerves from him so far?
TW: No. I think the drivers are always under pressure to perform and he's been coping well with that in the past and no difference in behaviour pattern than the previous races.

Now, there's so much talk and speculation about his future. If he wins title number seven here, does that trigger the start of the negotiations about next year?
TW: Yeah. I don't want to drop a date here because, if I do, everybody's going to ask at every single race - but this is what we agreed. I think it was important to make sure that we have both titles secured and then have a more relaxed approach to the discussion about the future.

How relaxed can you be - because it's only 48 days until the start of 2021. Is there any part of you that's getting nervous or even feeling cornered in your negotiations with Lewis Hamilton?
TW: No, not at all Tom. It's a good dependence on each other. We would like him in the car and I think he wants to drive the Mercedes - because it's competitive. So, no, I think there is a good balance.

And, from a Constructors' point of view, obviously you won number seven last time out in Imola. In these COVID times, can you tell us how the team has celebrated. I guess it's been different to previous successes for you?
TW: Yeah. I don't know. For myself, I can say that this one felt very special. We are not very good in celebrating, we always look forward - but there were moments where I was very proud of what the team has achieved. That was reflected also in the various video calls we had right after the race - but we will certainly find some time and allocate some time when it's becoming easier with Corona to celebrate that title - because it's a special title.

Guenther, a few stresses getting one of your drivers to the race track in time this weekend. How did he break the news to you - Romain Grosjean we're talking about - that he'd missed his flight.
GS: The team-manager had told me that he'd missed his flight and he's coming on Thursday morning, so it wasn't a big panic anyway. It sounded more dramatic than it was. He was here on Thursday morning, I saw him about 0900-0930, so no big drama to me.

In your history in Formula 1, have you ever had another driver who's missed flights? Caused you any grief?
GS: Yes!

Can you tell us any names?
GS: Kevin Magnussen! He missed his first flight. To a meeting - maybe it wasn't to a race but to a meeting with Gene Haas. He told me: “I'm sitting in Frankfurt, I missed my connection.” Good for you, you know! He was going to California. I'm pretty used to it. I'm calm about it. He missed a flight and then immediately arranged something else and we knew that he was coming the next day, so there was no panic, you know?

And while we're talking about drivers, how close are you to announcing your line-up for 2021?
GS: I copy Toto here. I don't want to tell you a date because then you keep on asking me. So, I learn from the best, giving answers. I don't know when we announce it. We are getting closer. We're getting close, put it this way.

(Dieter Rencken - Racing Lines) Question to Guenther and Toto please. On the Monday after Portimao, there were discussions on banning wind tunnels from 2030 etc., On the one side, Guenther, you don't have one within your team, and on the other side Toto, you've probably got the best, if not amongst the best wind tunnel. How do you feel about this and can CFD really replace wind tunnel testing?
GS: I think everything is possible and technology gets better, as we all know. Technology is advancing in big steps, so I think we don't need to decide now, but going in that direction I think would maybe be the right thing to do. I think it's too early to come to a complete conclusion but, if it is like this, if everybody is the same, this is what we are going do, I will support it.

Toto?
TW: Yes, I think there was broad agreement that over the long term this would happen but it's such a massive regulatory change that also involves certain safety aspects. We must not forget that these cars are the fastest on the planet with the most downforce and we don't want to experiment live with drivers in the car based on CFD. As for our tunnel, it's the same generation as a few others in the paddock. We've worked on the tunnel over the last years as has everybody else, and people tend to say there is a silver bullet, that the tunnel is very good or the tyre analysis is very good, or the engine is very good but it's always the combination of everything. Therefore, I think setting a target like 2030 banning wind tunnels is a path that works for everybody and is going to help us make the sport more sustainable from the financial side.