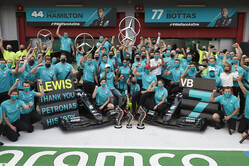 Whatever way you look at it, Mercedes success since the introduction of the hybrid formula in 2014 has been phenomenal.

Though the German team failed to set the world alight in its opening three seasons, in 2013, ahead of the introduction of the hybrid formula a year later, the surprise arrival of Lewis Hamilton breathed new life into the Brackley-based outfit which finished runner-up to Red Bull.

The hybrid era however, was something else entirely, Nico Rosberg winning the opening round of the 2014 season as the German team went on to score seven successive constructor and driver titles.

Of the 134 Grand Prix held since the hybrid era began, Mercedes has won 100, a staggering 73.1%, while the second most successful team of the era, Ferrari, has only managed 17 wins and doesn't look like adding to its tally any time soon.

However, such success has come at a price admits Toto Wolff.

"Blood, sweat and tears, that is going on behind closed doors, but you never see that," he continued.

"It seems like that we are rocking up on track and winning races, but the truth is there is so much sacrifice behind that on such an afternoon, it, just compensates for everything," he added, as the team racked up its 100th win.

Sharing the same Brackley DNA as the ill-fated British American Racing project, then Honda and finally Brawn, Wolff admits that as the German team anticipated the hybrid era - the formula Renault had pushed so hard for - the target was to win just one title.

"You know the story with all of our tree hugging exercises in 2014, when we put the objective on the wall that we aim to win a drivers' and constructors' world championship," he said.

"And Aldo Costa said, 'I don't think that's ambitious enough. We should write on the wall: we aim to win multiple driver and constructor world championships'.

"We felt at the time that it was a bit far-fetched," admits the Austrian. "But thank God we put it up the wall, because it continues to inspire us. And every single season it has inspired us.

"It means a lot of thinking and a lot of dreaming about what we could achieve in the future. Setting those objectives as a team and personal objectives is an important part of our exercise."