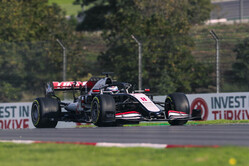 The 14th round of the 2020 FIA Formula 1 World Championship began with practice on Friday at Intercity Istanbul Park as teams prepared for Sunday's Turkish Grand Prix.

FP1 started with grip at a premium on the recently resurfaced track layout. With cooler conditions thrown in for good measure - with the air temperature hovering around 15 degrees Celsius / 59 degrees Fahrenheit and track temperature peaking at 22 degrees Celsius / 71.6 degrees Fahrenheit - it proved a challenging start to the weekend for the field. Grosjean and Magnussen both started off with an installation lap and a wake-up run utilizing the Pirelli P Zero White hard tires. Grosjean then swapped to a set of Yellow medium tires for the remainder of the session. He posted a best lap of 1:40.025 for 14th overall. Magnussen ran a second set of hard rubber with a fastest lap of 1:41.854 by the checkered - placing him 17th.

The afternoon presented similar conditions but a gradual increase in grip saw FP2 lap times drop across the board. Grosjean and Magnussen set their fastest laps sampling the Red soft tires. Grosjean banked a 1:32.570 having had his fastest lap of 1:32.321 deleted for exceeding track limits - the Frenchman 18th on the timesheet. Magnussen clocked a 1:32.807 during his 11-lap outing on the soft compound to place the Dane directly behind his teammate in 19th. The afternoon run plan concluded with high-fuel runs to the checkered.

Romain Grosjean: "It was slippery, that's about the least we can say. It's to be expected with the new tarmac. We've been struggling with the tires. I ran the hard tires this afternoon - I was about five seconds off the pace of Kevin (Magnussen) on the mediums. So, I'm not sure we're going to touch them for the rest of the weekend. The track got better, but there's only one racing line. That's going to make overtaking and so on quite tricky. If you're off-line, the grip level is back to what it was this morning. Maybe the rain cleans it, I think there's a chance of rain tomorrow. It could also make it worse getting the oil out of the new tarmac. I guess we'll find out tomorrow. The trickier it is though, the more there could be opportunities for a team like Haas. We'll try our best and use all of our experience."

Kevin Magnussen: "It was very extreme conditions this morning. There were some wet patches to start, but even on the dry patches - it was just the lowest grip I've ever felt in dry conditions. It was really crazy, but kind of cool as well to have that experience. It was the same for everyone. It was just a new challenge, I guess. The grip got better throughout the day. There was some rubber being put down on the racing line and it cleaned up a bit. It got better but nowhere near the level of grips we'd have normally. It's probably going to be a very slippery race this weekend, especially with no support series here - it could be chaotic, especially when you go off-line to overtake. Some corners, like turn 12, if you lock up a little bit and you miss the apex by a few meters - you're just driving on ice. You have to be very precise."

Guenther Steiner: "It was a strange day for everybody today, I'd say. It was very slippery, very unusual for a free practice session - but understandable. We haven't raced here in a long time, the track was cold and damp, we really had it all. The tires, as Pirelli have said, they were not planned for such a cold event. We just need to get a grip of it, we need to use tomorrow what we've learned today. The prediction is rain for tomorrow - that will make it even more challenging. As we say though, challenges are opportunities. I hope we can take them."