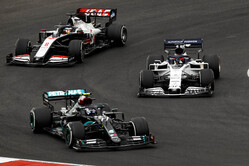 Haas F1 Team drivers Kevin Magnussen and Romain Grosjean classified 16th and 17th, respectively, at the Portuguese Grand Prix, the 12th round of the 2020 FIA Formula 1 World Championship at the Autodromo Internacional do Algarve.

Magnussen started from 19th and was the only driver to do so on Pirelli's P Zero White hard tires. In spite of limited grip, exacerbated by the recently resurfaced track and a light sprinkling of rain that fell as the lights went out, Magnussen made a customary strong getaway and made up a spot to hold 18th place. Magnussen extended his first stint to rise up to 11th before coming in on lap 31 of 66 for fresh Yellow medium tires, preserving that set through to the checkered flag to take 16th position.

Grosjean took the start from 18th spot and did so on medium tires - making gains as others struggled with the conditions. Grosjean held 15th and made his sole stop on lap 26, bolting on a set of hard tires before battling with Alfa Romeo's Antonio Giovinazzi through to the flag. Grosjean fell just shy of demoting Giovinazzi and was unfortunately docked five seconds for a track limits violation, dropping him to 17th place.

Haas F1 Team will be back in action for the Emilia Romagna Grand Prix, to be held at the Autodromo Internazionale Enzo e Dino Ferrari in Imola, across October 31 - November 1.

Romain Grosjean: "The first few laps of the race were quite slippery and fun. I managed to work my way through and put in a few overtaking moves. Sadly, the pace just wasn't there though. We were really struggling on the straights so I couldn't overtake anyone. We did the best we could and we extracted the maximum from the car - that's all we can hope for."

Kevin Magnussen: "We started on the hard tires to make sure we were the last car to box. We were going for luck, hoping for rain, a safety car, red flag or virtual safety car - something like that. We needed that in the window where I was running long compared to the others. It was a long shot, but we knew we didn't have a chance of points with a normal race. We went for it. That said, I still beat some people with the conventional strategies. It was the best we could do I think."

Guenther Steiner: "I think after yesterday's qualifying this result hasn't come unexpectedly. We just tried to do the best we could. The positive is our cars are in good shape, which they need to be as we're going back racing next weekend. We have to try to do something to get something out of that one. It's a new circuit which hopefully has some surprises - positive ones, not negative ones. We look forward to going to Imola."