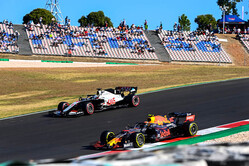 Grosjean and Magnussen entered Q1 with two sets of Pirelli P Zero Red softs for their timed attacks. Grosjean set a best time of 1:18.643 after three runs on his first set of tires. He clocked a faster lap of 1:18.364 on his second set to place 18th at the checkered. Magnussen's fastest lap on his first Q1 outing was a 1:18.901. He managed to shave fourth-tenths of a second off that with another set of fresh softs bolted on for his second stint - lapping in 1:18.508 for 19th overall.

Romain Grosjean: "The circuit is pretty cool, it really is a rollercoaster. I would add some gravel in turn one and turn four to get rid of the track limit issue, that would also spice things up on the high-speed corners. Looking at the layout of the circuit here with the low-speed corners, it was always going to be difficult. We're also suffering from rear overheating on my car on the suspension, the balance was changing lap after lap. I don't know where we'll end up in the race. More uncertainty - such as rain, as I said at the Nurburgring, is the best for us - we can maybe pull something out of the hat."

Kevin Magnussen: "Some frustration today. We had a problem with the car that meant we could only do two laps on every run - we had been planning to do three laps, at least on the first set of tires to learn as much as we could. On top of that I had traffic on my second lap on the first run, so I didn't learn a lot on that run. We were just on the backfoot for the next outing. Considering all that, I think I did a decent lap, it was the best that I could do. Clearly we don't have the pace but we'll do what we can for the race. We'll see what happens tomorrow."

Guenther Steiner: "This was not what you're looking for from a qualifying session - but it is what it is at the moment. We just need to see what the weather does tomorrow. Maybe we get lucky there and get something out of it. Otherwise, we are where we are."