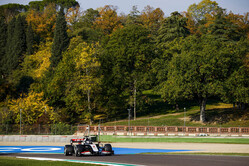 Both Grosjean and Magnussen started the day with a productive stand-alone free practice session - Formula 1 trialing a new two-day race weekend format in Italy. The 90-minute outing saw both drivers sample all three Pirelli P Zero tire compounds available, with 87 laps logged between them as they made the most of the limited track time ahead of qualifying.

Grosjean and Magnussen opened qualifying with two new sets of softs available for their Q1 runs. On his first set Grosjean logged a 1:16.251 before his return to the garage. Armed with another set of fresh rubber the Frenchman improved his time to 1:15.918 - just missing out on advancing into Q2 to finish 16th. Magnussen posted a fastest lap of 1:16.508 before dropping to a 1:15.939 lap on his second run on new softs. The Dane ended Q1 directly behind his teammate placing 17th overall.

Romain Grosjean: "A lot of places can learn from these older tracks. When you drive here, or places like the Nürburgring or Mugello, it's so bloody good. I've really enjoyed it. Yes, we don't have the fastest car, but every lap here is fun. It's tough not to get to Q2, especially after such a good lap. Kevin (Magnussen) is the same - we push each other so hard and we get to the absolute limit of the car. Unfortunately, today that's only good enough for 16th and 17th. We're normally better in the race than we are in qualifying. We obviously need to see how tire degradation plays a role tomorrow, but we will try for sure. We'll give it 100 percent."

Kevin Magnussen: "I enjoyed the session. It's a really cool track to drive. Of course, I'm not too happy with the result - though I think this weekend we appear to be a little bit stronger. We should have been through to Q2, but I didn't have a smooth qualifying. I had traffic and I had a gearbox problem - nothing serious, but it cost me lap time on my fastest laps. The gap to get through to Q2 was very small, so it's a bit frustrating when you look at that. Anyway, we are where we are. I'm looking forward to a fun race, and as I said - it's a really cool track, so I'll enjoy that at least. I'll try to do my best as always to get something out of it."

Guenther Steiner: "The positive thing is, having only one free practice session seems to be working. I think the whole paddock did a good job, there was no drama, nothing. That is a good thing. Then qualifying - well there's not a lot to say. We are where we are usually. We're fighting with our closest opponents, and that's what we do. Tomorrow in the race, maybe we can get some points."