Perez' tyres were one lap away from "exploding" 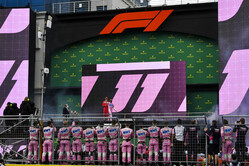 Sergio Perez was one of only three drivers to make just one stop for tyres during the Turkish Grand Prix.

While Lewis Hamilton and Daniil Kvyat both stopped after 8 laps, the Briton taking on a used set of Inters and the Russian a brand new set, Perez stopped two laps later for a fresh set of the green-banded tyres.

While his teammate's race fell apart once he switched to Inters, Perez, like Hamilton, had little choice but to go the distance, and despite a late scare when he was passed on the final lap by Charles Leclerc, only for the Ferrari driver to make a mistake and hand the position back, the Mexican hand on for a widely acclaimed second.

Speaking at race end however, Perez revealed that he was just one lap away from potential disaster.

"A great race, a difficult one, all the way through looking after the tyres, trying to learn the conditions," said the Mexican, who, having gone fourth in the driver standings, has yet to secure a seat for next season.

"It's a great result," he continued, "though in hindsight I don't know if we could have done any better, pitting for a new set at the end.

"In the end we got the result," he smiled. "My tyres were vibrating like hell. I was telling my team on the radio as soon as I crossed the line, one more lap and they explode.

"It was a great race, a great call from the team. I'm pleased with the result."

For the first 35 laps of the 58 lap race, the Points were looking good, but following his second stop Lance Stroll's race began to fall apart.

Perez took the lead for just one lap before being overhauled by Hamilton, who went on to build a 30s comfort zone, but who, like Perez, was being urged to pit during the final stages of the race for fresh rubber.

"I think Lewis was extremely strong today," said the Mexican. "The level he has, he came by easily.

"My mirrors were full of fog," he added, "I wasn't able to see at all in my mirrors. Maybe that's why I had such a race.

"They kept me informed about Lewis' pace and then he just came by. I didn't expect him to be there, he just passed me and disappeared and controlled the race from there."