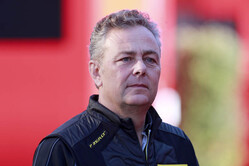 The FIA, Formula 1 and Pirelli have today confirmed that the Italian manufacturer's Head of F1 and Car Racing, Mario Isola tested positive for COVID-19 on Sunday at the Turkish Grand Prix.

He returned a positive result during the regular Sunday COVID testing schedule and is now isolating, and is asymptomatic and will adhere to the local medical guidelines.

All close contacts have been declared, retested, and no further positive cases have been returned.

The news comes at a time when the FIA and F1 have confirmed that between Friday 6th November and Thursday 12th November, 2543 tests for COVID-19 were performed on drivers, teams and personnel and of these, 8 people tested positive, in addition to the previously announced positive case for Williams acting team principal, Simon Roberts.

To date 69,103 tests have been performed since the start of the season, with 71 testing positive. The last five weeks have seen an avarage of 8 positive tests each week.