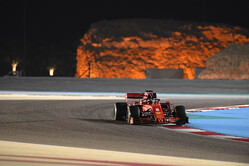 Scuderia Ferrari and its two drivers had plenty to get through during Friday's free practice sessions. Sebastian Vettel and Charles Leclerc completed a total of 118 laps of the Sakhir track, working on three main areas: the 2021 season, the current one and, along with all the other teams, an evaluation of Pirelli's C3 compound tyres to be used next year.

There were a few drops of rain in this session, which started off with taking measurements for next season. Next, both drivers tried the 2021 Pirelli tyres and then focused on the usual job of fine tuning the car set-up, before using the final 45 minutes for qualifying and race simulation runs, making the most of the fact that overcast skies meant temperatures never got above 27 Centigrade. Charles' and Seb's best times were very similar, the former stopping the clocks in 1:30.589 and the latter just 39 thousandths slower in 1:30.628. Leclerc did 29 laps, five more than Vettel.

In the 90 minutes of track time that began at 6pm, after sunset, Seb completed 35 laps and Charles did 30. Once again Charles and Seb ran the Pirelli 2021 prototype tyres. Then, on the Medium compound Charles did a 1:31.032 and Seb a 1:31.038, this last time cancelled for exceeding track limits. They then switched to the Softs with which they set their best times, Seb quickest in 1:30.110 and Charles stopping the clocks in 1:30.407 having made a mistake at the last corner. The session was stopped at two thirds distance after Alex Albon crashed. The green light was given with 26 minutes remaining and at this point, both Sebastian and Charles concentrated on long runs, using both the Medium and Soft compounds.

Sebastian Vettel: "Today in the first session the sun was still up while in the second one it was night time, however, maybe because of the time of year, there was definitely less difference between the sessions compared to the previous years. I think that the Sakhir track does not suit us as well as it has done in the past, but we still have a little bit to improve and work on, so let's see what we can do tomorrow.

"Looking ahead to Sunday, we know the track is tough on tyres and so it is difficult to make them last, but it will be the same for everybody. It is yet not clear which tyres will work best, and therefore how many stops we will need. But first we must focus on quali and then we will see for the race. While it's true the point are only given out at the end of the race, the higher up the grid you start, the better your chances, as you have more options in terms of strategy and tyre management."

Charles Leclerc: "It's been a difficult first day. I was expecting to do a bit better because traditionally this is has been very strong track for the team in the past few years, but today, we seemed to struggle quite a bit more. But we are usually pretty good at fixing the issues overnight, so hopefully we'll come back stronger tomorrow.

"I think it's pretty clear what we need to do to improve. It's just the balance really, as through the corners it's very tricky and it's quite difficult to manage the car and I made a few mistakes. The times are all extremely close, so any gains we make can result in a big difference."