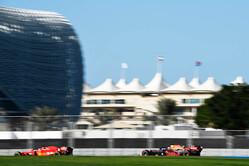 Due to the fact that this session - and FP3 - takes part in different conditions than qualifying and the race, much of this session will be dedicated to the development of parts for next season whilst also giving the reserve drivers an outing.

Indeed, at Haas, Mick Schumacher makes his long-awaited debut, after his outing at the Nurburgring was thwarted by the weather, while Robert Kubica takes over Antonio Giovinazzi's car.

Of course, the big news is that Lewis Hamilton is back in the Mercedes, which means that poor old George Russell returns to Williams.

At Haas, Pietro Fittipaldi is back in the car previously driven by Romain Grosjean.

As more drivers head out all three compounds are being used.

As anticipated, many of the cars are sporting aero rakes, with flo-viz aplenty.

Schumacher is one of the early birds, the German sporting hards.

The aero rake on the back of Vettel's car is unusual to say the least, almost looking like a permanent structure.

Ocon reports that his steering wheel is pulling to the left, "sorry, right," he quickly adds.

Just six minutes in and all twenty drivers have made an appearance.

Told to ease up on his brakes as the temperatures are rising, Hamilton advises that he's not braking, which suggests a possible sensor issue.

Replay shows that the front-left on the Mercedes is locking-up as Hamilton exits a corner.

"Cancel the magic," Hamilton is told, "we'll come in without the magic on."

Magic? So, that explains everything.

Raikkonen goes third with a 41.476, ahead of Ocon, Albon, Vetel and Hamilton.

Seemingly, Perez has a number of new power unit elements and will therefore start from the back of the grid. Then again, that didn't hinder him last weekend.

"I have a problem," reports Ricciardo as he grinds to a halt in Turn 9. The VSC is subsequently deployed.

Before that, Raikkonen had improves to second with a 40.541.

The VSC is withdrawn and the session resumes... which appears to be the green light for Verstappen, who goes quickest in the first two sectors, finally crossing the line at 39.113.

Moments later Bottas responds with a 37.412, albeit on the softs.

As Norris complains of oversteer in "every single corner", Stroll has his times deleted for two successive laps. This weekend, the corner where the FIA is cracking down in Turn 21, the final corner.

Mercedes reveals that the issue with Hamilton's brakes was the master cylinder.

At the forty minute mark, when a set of tyres have to be handed back, it's: Bottas, Verstappen, Perez, Gasly, Sainz, Ocon, Raikkonen, Stroll, Norris and Albon.

Hamilton (hards) is one of the first back out following the lull, the Briton subsequently joined by his teammate, Perez and Latifi.

The Briton subsequently improves to sixth with a 39.568.

Perez reports that he has loose (seat) belts.

Ocon goes third with a 38.515, the Frenchman clearly buoyed by last weekend's podium.

As Ferrari recovers from the shock retirement of its CEO, Leclerc is currently 10th and Vettel 18th.

Schumacher complains of something loose in his cockpit. His teammate is trying a new floor to be used next season.

Yet to try anything other than the hards, the Mercedes pair will be feeling very, very confident, for while Hamilton is 1.366s off Verstappen's best, Bottas is only 0.034s down on the Red Bull driver.

"In terms of pace you're very similar to Valtteri," Hamilton is told, "not many hard runners at the moment."

The cameras pick up on Vette as he bounces his Ferrari over the kerbs.