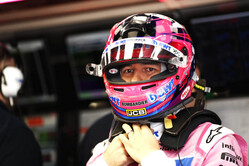 Sergio Perez looks likely to start this weekend's Abu Dhabi Grand Prix from the back of the grid after taking on new engine components.

The Mexican, who won last weekend's Sakhir Grand Prix, has taken on a new ICE (internal combustion engine), MGU-H and turbocharger, in each case this is the Racing Point driver's fourth element of the season.

While the move is likely to see Perez start from the back of the grid, this didn't cause him too many problems a week ago, when he pitted at the opening lap after his tangle with Charles Leclerc and subsequently rejoined the race in last (18th) position. On the other hand, the Yas Marina circuit is a track on which it is notoriously difficult to overtake... just ask young driver, Fernando Alonso.

Though unconfirmed, there is talk that Perez' engine was on the point giving up in the final moments of last week's race, which would have then seen the Mexican robbed of a podium position on two successive weekends.

Kevin Magnussen is likely to join Perez at the back of the grid on Sunday, the Dane, facing his final race in F1 before heading to IMSA, taking on a new energy store and control electronics.