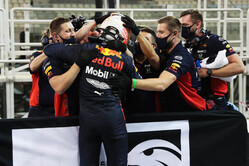 Heading into qualifying many feel that there are a number of unanswered questions in terms of the pecking order.

In FP2 we never saw representative times from Hamilton, Bottas or Verstappen, while this morning Mercedes opted not to send its drivers on a second qualifying run.

Consequently, on paper, Red Bull - in the shape of Verstappen - appears to have the edge.

However, looking across the sessions, though the Dutchman remains quickest, Bottas' best yesterday was only 0.025s down on the Red Bull, while Hamilton was 0.228s off.

With Christian Horner claiming the Mercedes has a 0.8s advantage on the main straight, though the German team has yet to show its hand, it looks very much as though when all is revealed it will be business as usual.

Thankfully, things are not as predictable behind them, for, as was the case yesterday, the midfield looks to be anybody's.

Ricciardo, Ocon, Norris, Stroll, Sainz, Perez, Kvyat and Leclerc are covered by just 0.393s, with Gasly also very much in the mix.

That said, while Leclerc faces a grid drop for his involvement in last weekend's first lap incident, Perez will start from the back of the grid tomorrow after taking on new engine components.

Add in the many millions at stake in the battle for third in the team standings, and even though tomorrow's winner might be entirely predictable, the battle behind will rage from start to finish.

At the back, and sadly we include Vettel, Russell looks a threat to make it into Q2, the Briton at times appearing to forget he is no longer driving the Mercedes.

With overtaking nigh impossible here - remember Petrov and Alonso? - a prime grid position is vital, that or base your entire strategy on the undercut of the misfortunes of others.

As ever the tyres are a conundrum, this weekend's anomaly being the fact that thus far the mediums are proving to be quicker than the softs, which should have the teams scratching their heads ahead of Q2 and Q3.

As ever, the FIA is cracking down on track limits and already this weekend we have witnessed countless drivers having their times deleted after running wide in the final corner (Turn 21).

The lights go green and the Haas pair are first out, followed by Russell.

Fittipaldi complains that Magnussen is slow.

As the trio begin their flying laps, the Bulls and Leclerc head down the pitlane.

Verstappen complains that he already has a flat-spot after braking heavily in the pitlane to avoid a "Williams guy" (Latifi). "What an idiot," snaps the Dutchman.

Verstappen posts a 36.807 and Albon a 36.106 as race control announces it will investigate the Latifi incident.

However, Hamilton has his time deleted, which promotes Perez to second.

Stroll goes fourth, ahead of Sainz, Verstappen, Norris and Leclerc, as Hamilton fears his floor is damaged after running over the kerbs in Turn 20.

Ocon goes quickest in S1, as the AlphaTauris go ninth and tenth.

Hamilton goes seventh with a 36.669, which should be enough to get him through.

PBs in all three sectors see Verstappen go second with a 35.993.

At the other end of the timesheet, Giovinazzi, Latifi, Russell, Fittipaldi and Magnussen are facing the chop, with Raikkonen, Vettel and Kvyat hovering.

While Perez, Verstappen, Albon, Stroll, Ricciardo and Sainz have settled for their times, Bottas and Hamilton head out along with the rest.

As the final assault gets underway there are plenty of greens, and also a brief yellow flag after Latifi spins.

So, Hamilton is quickest, ahead of Bottas, Leclerc, Verstappen, Norris, Perez, Albon, Kvyat, Stroll and Sainz.

The Mercedes pair get Q2 underway, both heading out on the mediums.

The McLarens, on the other hand, are adopting a split strategy, while the rest opt for a mixture of mediums and softs.

Bottas has the advantage in S1, but Hamilton has the edge in S2.

At the line Hamilton posts 35.466, while Bottas, despite being quickest in the first and final sectors, can only manage 35.527.

Gasly goes fourth and Kvyat fifth, both on the softs, but they are demoted when Norris (soft) goes third with a 35.849.

Verstappen (medium) goes sixth but is promoted to fifth when Albon has his 36.121 deleted.

Verstappen complains that his mediums "completely dropped off at the end".

So, Albon and Ricciardo have yet to post a legal time, while Perez, who starts from the back of the grid, has yet to post a time.

To add to Verstappen's frustration - which is never too far from the surface - the Dutchman is called to the weigh-bridge.

With just under five minutes remaining, Perez heads out. He should have the track to himself for his flying lap.

Struggling for grip, the Mexican asks if the track has cooled a lot. Told it hasn't, he aborts the lap and pits, his tyres scrubbed. Job done.

Kvyat leads the way as the final assault gets underway.

Most, bar Verstappen and Leclerc are now on softs.

In S1 there are few improvements, only Sainz, Verstappen and Ocon.

Giovinazzi fails to make the cut as does Vettel.

Stroll goes fifth while Ricciardo, even though on softs, can only manage 11th.

Albon goes fourth, on softs, which demotes Ocon into the drop zone.

Giovinazzi has his time deleted again.