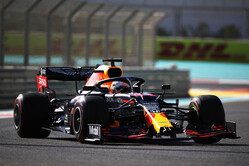 While Verstappen topped yesterday morning's timesheets, and Bottas led a Mercedes 1-2 in the afternoon, the earlier session took c=place in conditions which were unrepresentative of qualifying and the race.

Furthermore, courtesy of 2021 tyre testing, track limits, a red flag, traffic and mistakes, the three leading drivers all failed to post a representative time on the softs.

The second session, in particular, was not without problems, for while Russell encountered a late engine issue understood to be an MGU-K related, Raikkonen pulled to the side of the track with the back of his car ablaze and once the session resumed Hamilton encountered a problem with his gears that left him stranded in the pitlane.

As ever, the midfield is where the excitement lays, for Albon (4th), Norris, Ocon, Perez, Leclerc, Ricciardo, Stroll, Kvyat and Sainz were covered by just 0.353s.

The lights go green, but being such an unrepresentative session - especially the opening 15 or 20 minutes - there is no immediate rush to action.

With the drivers not even in their cars, and the session already ten minutes old, organisers should take note and in future time these session in order that they have more relevance.

14 minutes in and Ocon is climbing into his Renault, teammate Ricciardo also.

In fact, it is Latifi who gets proceedings underway, the Canadian heading out on softs. He is subsequently joined by the Haas pair, Fittipaldi and Magnussen.

Latifi posts 39.812, Fittipaldi 40.137 and Magnussen 40.258, as the Mercedes pair head out, the engine covers featuring the names of all the employees who have contributed to the team's success.

Giovinazzi posts 39.190, as Ocon appears to dump fluid on the track in S2.

Bottas goes top with a 38.034, as Albon goes purple in the first two sectors. As Hamilton aborts his lap after running wide, Albon posts a 37.536.

Verstappen goes quickest in S1, maintaining the pace in the second sector. At the line the Dutchman posts 37.175 to go top, 0.361s up on his Red Bull teammate.

Albon complains of a "lot of understeer at low speed".

As Bottas looks set to improve, Sainz is the last man to head out.

The Finn improves to fourth with a 37.857, as Sainz goes eighth.

Everyone on softs thus far, bar Norris and Stroll who are on mediums.

Despite a weak second sector - indeed he appeared to slow - Verstappen improves to 36.734, giving him an advantage of 0.573s over Hamilton who had just improved also.

With overtaking tough here - ask young driver Alonso - driver will be running on fumes in qualifying in order to get the best possible grid position.

While most head back to their garages to prepare for the qualifying sims, Perez, Sainz, Gasly and Stroll remain on track.

The Mercedes pair head out for their qualifying sims, followed by the Ferraris and Williams.

Bottas can only manage a PB, as can Hamilton. Again, Bottas posts a PB in S2, likewise his teammate.

Russell goes fifth with a 37.886, the Briton posting PBs in all three sectors.

Clearly not realising he is back in the Williams, Russell goes quickest in S1. He loses pace in S2, and again in S3, thereby failing to improve.

Going quickest in S1, Verstappen loses pace in S2, as Norris goes second overall with a 36.994.

Despite appearing to overdrive the car, Verstappen goes quickest in the final sector also, but fails to improve his overall time.

Sainz goes fifth (37.068), only to be demoted when Ocon bangs in a 36.899 to go third, the Frenchman quickest of all in the final sector, the toughest sector.

Albon still suffering "horrible" understeer, complaining that he is now suffering at every corner.

Verstappen goes quickest in S2, perhaps having learned from his previous effort, posts a PB in the final sector, thereby consolidating his position with a 36.251.

The Mercedes pair head out on fresh rubber as Albon goes second with a 36.752.

The Mercedes pair run out of time and consequently finish 6th (Hamilton) and 9th.