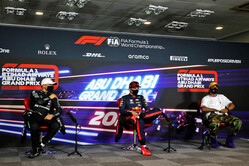 Max, congratulations, your first pole position [of 2020]. Put us in the cockpit.
Max Verstappen: I said before I went to qualifying that it's going to be the final send of the season and we did that, so very happy with that. It was quite a tricky qualifying in the beginning you know, to get your laps in, especially at this track the last sector, there are so many corners where you can make a mistake but yeah everything came together in that final lap.

It shows great progress from the Red Bull team. It shows great progress from Honda. It's a great way for you to end this season and sets you up perfectly to go for the win tomorrow.
MV: Yeah, exactly. It's a long season for everyone and especially a lot of races in a row. I think this was a good final qualifying for everyone in the team. The whole year when you are behind but getting closer it's getting sometimes a bit frustrating but very, very pleased with today.

Thinking about the race tomorrow, how are the long runs? How competitive do you think you can be?
MV: Yeah, I don't think we did a lot of laps - everyone. We'll just have to wait and see how that goes. We'll try to do our best; try to keep them behind. They are still very fast, but it seems we have quite decent top speed this weekend so hopefully it will work out tomorrow.

Valtteri, you drove a great lap in the car. It's no easy task, as we know, to outqualify Lewis, but then in the end Max comes and steals the pole from you?
Valtteri Bottas: Yeah, we saw in practice three that Red Bull, especially in the hands of Max was pretty quick. I think the main issue was that we couldn't get the soft tyres to work properly as they should, so all the way until qualifying the medium tyres was better for us than the soft. I think we made some improvements but looking at the result I don't think we got 100% out of a single lap from the tyres. On the lap itself I wasn't fully happy how everything went. The balance was not quite perfect. Obviously small margins and tomorrow is the day.

When you say it wasn't quite perfect, was that just generally across the lap or was there one particular sector where you were struggling?
VB: Towards the end of qualifying I started to struggle a bit more with the front end of the car - maybe with the track cooling down. Then it made it difficult to improve more, because I thought we should have been quite a bit quicker than the earlier sessions but Red Bull managed to optimise everything for the last part of their qualifying which matters.

Lewis, it's been a tough couple of weeks for you, how good was it to be back in the car?
Lewis Hamilton: Honestly, as I've said through the weekend, really grateful to be back here with the team and try to close out the strong season we've had. It's definitely been a difficult weekend, I would say, just getting back into a rhythm, even though it's only been a couple of weeks off it just felt like you'd lost that momentum and I really struggled so far with the balance this weekend. But I gave it my all. Congratulations to Max, it's a great way for him to seal the year, a year of great performance, but we are going to hopefully give them a good run for their money tomorrow.

I know you will be disappointed not to have the pole but many, like myself, I'm sure are really excited to see what you can do from third place. You're a natural born race so is the mind already thinking ‘how can turn this around?'
LH: Absolutely. Absolutely. Of course it's always nice to start first but you can't always and this makes it even more exciting. It's a very difficult track to overtake naturally but with strategy and everything maybe we can... The start is going to be important, first few laps, those stints, yeah I'm definitely excited to try to figure out how I can turn it around.

You mention strategy, any insight you can give as to what it's looking like in terms of stops tomorrow?
LH: I wouldn't say it's looking like anything exciting. It's normally a one stop here or something like that. I don't think a two-stop works, you've got a really long pit lane and pit lane exit for example, so everyone will try to minimise it to a one, but we shall see.

Max, many congratulations, pole number three of your career and your first of 2020. You're in a different seat, here in the press conference - just how sweet was that final lap of Q3?
MV: Yeah, it's nice for once to sit in this seat but it was quite a tricky qualifying in the beginning to get the laps in. I don't know, in Q1 I got stuck in the steering wheel with my hand so I had to do another lap but then also on the Mediums, was a bit tricky but we managed to get out lap in and then yeah, in Q3 it wasn't too bad. This track has so many corners it's very easy to make a mistake. It's a bit like Singapore where every corner just follows up.

LH: Much harder than last week!

MV: Yeah! It was quite a lot harder than last week.

But Max, just how good was that pole lap at the end there?
MV: It was good enough, luckily. I crossed the line and I saw of course I was moving up but there were still a few cars behind me but it feels nice. The whole year we were closing in a little bit. Missed out a few times and then finally to at least sit here once, after of course, the dominance they had throughout the year, I think it's very nice for us, and the whole team as well, it's been a very long season - in a short period of time, a lot of races. I think everyone, you know they want the break but to have poll position is surely a good motivation for everyone in the team to try to finish it off tomorrow.

Well Max, the race has been won from pole for the past five years. How confident are you of the RB16's race pace?
MV: Well, we'll find out tomorrow, to be honest. I will have a look at what we can do but I think not a lot of people had a proper long run because of the red flag we had, so it will be interesting tomorrow. I'll do my best, seems like our top speed this weekend is not too bad and that's always nice. For sure, Valtteri and Lewis, they will be very close and it will be a good battle, hopefully.

Valtteri, so close in the end. You were a matter of hundredths behind Max. Just how good was your final lap of Q3?
VB: I think like Max said, here it's obviously extremely difficult to get a perfect lap. That's ultimately always the target but you can always find a couple of hundredths here and there, so obviously, yes, could have done a better job because it wasn't too bad. I think the main issue was really, as the session was going on, I felt like it was getting more and more difficult, and in Q3 I was surprised at how little we could extract lap time, better track and everything. So, maybe struggled a bit with the front end of the car towards the end of the quali. Maybe with the track temp dropping. Ultimately, I think, today especially, Red Bull have been really quick on the Soft tyre and I think we've lacked a bit in extracting more from the Soft, compared to the Medium. So I think that's something to learn for the future but anyways, it's the race tomorrow and it's going to be a close one - at least between us three.

You've explained the one-lap pace. How confident are you in your long runs after Friday?
VB: In general, we have a strong package, no matter which track. I think everyone's long-running was compromised but we know we have a strong car and I felt more comfortable with the Medium tyre, so hopefully we can have good pace and I'm sure we will fight for the win.

Lewis, coming to you, welcome back, great to see you again. Unbelievably close at the top there, less than a tenth of a second separating the top three. What's your feeling after this session?
LH: I'm just happy to be back. Just grateful. Congrats to Max, he did a great job today and I don't think it's about talking about whether you had a good lap or not, or whether you could have more. At the end of the day, Max did the job today and we just have to focus to tomorrow. I'm just, as I say, grateful to be back and while I'm probably not one hundred per cent, I still gave my all.

Quick word about Q1. We saw you run wide at the beginning of Q1. Was the car carrying any damage for the remainder of the session?
LH: It did have a little bit of damage yeah. It's the first time I'd gone wide there all weekend, so just a little bit of damage to the floor but nothing that... I don't think that if there hadn't been damage then I would have got pole. For sure it doesn't' help but nonetheless the guys did a good job to try to patch it up and they'll fix it overnight.