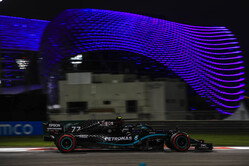 Valtteri finished the morning session in P2 with Lewis in P5. In FP2, Valtteri set the fastest lap of the day, followed closely by Lewis in P2.

The team focused on building an understanding of the 2021 prototype tyres as well as single lap and long run work on the 2020 tyres.

Valtteri Bottas: It was a decent Friday. The car felt good from the get-go, but there's still a lot of work for us to do. The main focus will be to get the balance right throughout the entire lap, as I was struggling with the front end in some corners and with the rear end in the others. I also couldn't really get the Soft tyres into the window; I didn't have any grip on my first lap, so I think they were too cold, but in the following lap they were already overheating, so there's clearly some work to do. The Medium actually felt like a better tyre for me, but that's because we weren't able to extract everything from the Soft today. It's been a decent first day on track, but I'll take it lap by lap and my targets are clear for the weekend ahead. I'm happy Lewis is back with us again this weekend, it's nice to see him back with the team and in the car.

Lewis Hamilton: I'm grateful to be back with the team and back in the car. I missed doing what I love last week, so I was very happy to arrive at the circuit this morning. It's taken a good session and a half to get back into the flow even though it's been such a short amount of time that I wasn't in the car. The car didn't quite feel the same as I had left it, so I'm now working my way back to feeling more comfortable balance-wise. We had an issue with the pedals and the brakes in FP1 which cost us around 40 minutes of track time, but the team did a great job to change everything so quickly; they have been flat out for three weeks now and still keep pushing. Otherwise the sessions all went ok, the last one felt a bit better, although we didn't get to do the long run at the end. We'll get our heads down and work hard tonight, to be in the best shape possible for qualifying and the race.

Andrew Shovlin: We've had quite a tricky day overall. Lewis had an issue with his brake pedal assembly this morning that meant we lost the first bit of FP1 and he couldn't run the Soft tyre. We also had a problem with Valtteri's throttle pedal that we changed as a precaution during the second session. Both those issues cost us a few laps and the red flag towards the end meant we didn't get to do a long run on the Medium tyre. In terms of pace we looked ok on a single lap. We didn't get the best out of the Soft; it's a difficult tyre to optimise and we'll have a few more stabs at that tomorrow ahead of qualifying. We didn't get a great picture of where we are on long runs as we only had a short stint on the Hard in the first session and the prototype tyre in the second session. However, I think everyone is in a similar boat, so I don't think we're necessarily at a disadvantage, but we'll be going into the race without the normal amount of information on the tyres and the balance.