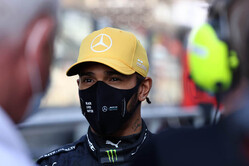 Finishing the season with a relatively lacklustre performance, world champion, Lewis Hamilton says he hopes to agree a new deal by Christmas.

One of the main talking points following yesterday's Abu Dhabi Grand Prix - other than whether it was the most boring race in living memory - was whether Lewis Hamilton should have participated.

The world champion never truly looked 'on it' this weekend, and after both qualifying and the race admitted that he was not 100% recovered from the coronavirus that forced him to miss the Sakhir Grand Prix.

"Physically, massively. I don't think I've ever been so blown," replied the Briton after yesterday's race, when asked if he was still feeling the effects of the virus. "My body's not feeling pretty good.

"I look on the bright side, I made it through," he added. "I didn't think any time last week that I'd be here, so I'm just really, really grateful for my health and to be alive.

"I'm looking forward to recovering over the next period of time we have and getting back into training and getting my body back to where I know it should be."

Referring to the race, in which neither of the Mercedes drivers ever looked convincing and in the latter stages saw Alex Albon reel him in, Hamilton said: "Considering the past couple of weeks I've had, I'm really genuinely happy with the weekend. It's obviously not 100 percent as good as I actually would like.

"All year physically I've been fine, but today I definitely wasn't," he admitted. "I'm just glad it's over. Big thanks to the team for their continued support. It's still a fantastic result to get two podium finishes for us."

While the season might be over, there is still the little mater of a new contract with Mercedes, his current one running out in just two weeks.

"So I hope we can begin, this week, discussions and get it tied up before Christmas."