Wolff dismisses talk of a shoot-out 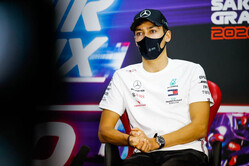 Toto Wolff has dismissed talk of George Russell and Valtteri Bottas being in a shoot-out for the second Mercedes seat.

On a day which saw George Russell top the timesheets in both sessions and teammate Valtteri Bottas struggle, failing to complete a legal flying lap in the second, journalists, who only a year ago were suggesting a "dream move" to Ferrari for Lewis Hamilton, began speculating whether this weekend was shaping-up to be a shoot-out for the second Mercedes seat in 2021.

Taking full advantage of his promotion to the 'big team' in the wake of Lewis Hamilton testing positive for COVID, Russell showed that he has pace in addition to a mature approach to his race craft and the way he interacts with his team.

Bottas, on the other hand, compromised his opening session by running over the kerbs at Turn 8 and damaging his floor, while his best time in FP2, which would have put him fastest, was deleted. Subsequently he was unable to put together another decent lap on the softs and ended the day eleventh fastest.

With Russell likely to stand-in for Hamilton again in Abu Dhabi, the Briton has the perfect opportunity to serve notice that he is ready to partner the world champion in 2022, however some sections of the media are speculating that the Williams star could be promoted to the role even sooner.

"There is no shootout," Wolff told reporters. "If George does well, it's an indication that one day he's going to be in a good car and hopefully race for victories and world championships.

"We know that we race next year with Lewis and Valtteri," he added. "Where we are in 2022 is all going to depend how our own season in 2021 is going to go and not by George's performance on a oval in Bahrain and on a season final in Abu Dhabi.

"We have total trust in Valtteri and loyalty as we have always had, and that is our position."

Of course, that's always assuming that Hamilton is in the Mercedes next year.