Alonso's return will be positive for F1 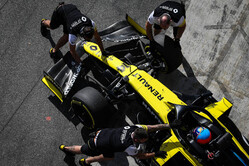 Former F1 driver, Pedro de la Rosa believes that the return of countryman Fernando Alonso will be positive for the sport.

The Spaniard, who contested 107 Grands Prix between 1999 and 2012 for Arrows, Prost, Jaguar, McLaren, Sauber and HRT, even tips Alonso for another title.

"He loves Formula 1," says the Spaniard in a new documentary about the two-time world champion who returns to the grid this season with Alpine.

"These last few years away from the sport have made him appreciate F1," he added. "His return is going to be very positive for F1 in general, not just for him, he can win the world championship again!

"In Spain he has created an excitement around the sport, it all used to be a bit sad before Alonso appeared. People used to be completely indifferent to it because there wasn't a Spaniard who was winning."

Alonso, who topped the timesheets at last month's Young Driver Test, is not the only reason interest in Spain is building ahead of the new season, for at Ferrari, Carlos Sainz joins Charles Leclerc, thereby becoming the first Spaniard to race for the Scuderia since... Alonso in 2014.