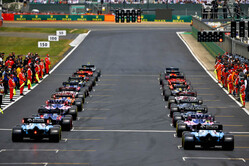 Silverstone boss, Stuart Pringle is confident that this year's British Grand Prix will witness a capacity crowd as life begins to return to normal.

While the 'too soon/too late' debate continues, earlier this week Britain's Prime Minister, Boris Johnson laid out the so-called roadmap that will heopefully see life return to normal.

With Lewis Hamilton on the cusp of a historic eighth title, Silverstone boss, Stuart Pringle is confident that a capacity crowd will be able to attend this summer's British Grand Prix to cheer him on.

"A full crowd is still absolutely on the table," he told the Press Association. "Silverstone is not a tight stadium in the same way that a football stadium is or a tennis court.

"Our 70,000 grandstand seats are spread out over three-and-a-half miles," he added. "We have got a lot of space, we are absolutely an outdoor venue, we have a lot of entrances and exits.

"Anything is possible, but it has also been made clear it is far from guaranteed."

Last year, Silverstone hosted back-to-back events, the British and the 70th Anniversary Grands Prix, which were won by Hamilton and Max Verstappen respectively.