Preparations for Monaco GP get underway 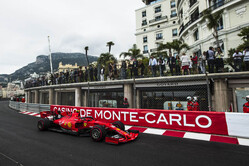 The Automobile Club de Monaco has given the green light for work to begin on preparing the circuit for this year's Grand Prix.

Due to the pandemic, last year's event was the first time since 1954 that the Principality hasn't reverberated to the sound of F1, and with the threat from the virus still uncertain many feared this year would see a repeat.

Despite the various travel restrictions around the world, F1 was quick to act on speculation that Monaco - in many ways the jewel in the sport's crown - was likely to be one of several street races that could go ahead this year.

"We have set out the details of the revised 2021 calendar and there are no other changes," said an F1 spokesman last month. "The suggestion street races will not take place is completely wrong."

"Despite the latest rumours circulating on certain websites and social media, the ACM can confirm that the Monaco GP will take place from May 20th to 23rd, 2021," the Automobile Club de Monaco posted on twitter this afternoon.

Yesterday, it was announced that construction work will get underway on Monday for the event.

The work programme, which includes the construction of the grandstands and other facilities is expected to last around seven weeks, leaving the track ready for the Historique event in April.

With the EPrix in early May, 2021 is the first year the Principality has hosted all three events, the EPrix usually alternating with the Historique event.

While the uncertainty over the virus continues, the ACM's decision must be seen as a positive for the sport which hasn't held a street race since Singapore 2019.