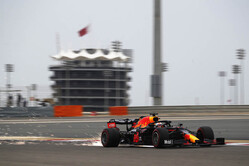 As the 2021 running of the Le Mans 24 Hours is postponed by two months, Organisers in Bahrain have revealed that only fans who have received both COVID vaccinations, or have recovered from the virus, can attend the forthcoming season opener.

The news comes days after the Kingdom offered the vaccine to F1 team personnel attending pre-season testing and the race, the offer subsequently declined by F1 bosses.

While there is an obvious desire to get the season underway on time - following the postponement of the Australian Grand Prix - and with an eye on last season when the schedule finally got underway in July, with Bahrain having hosted F1 as recently as December there were already fears that fans might not warm to the idea of the sport returning to the same track so soon.

However, needs must, and Chase Carey's insistence on putting a 23-date calendar together has left the sport facing some hard decisions.

"We are delighted to be able to launch our ticket sales today, once again giving fans the opportunity to witness the spectacle of F1," said Bahrain International Circuit chief executive, Shaikh Salman bin Isa Al Khalifa.

"In November and December last year, we had the honour to host our healthcare heroes as spectators, and we are pleased this time be open for a broader group of fans, with tickets available to buy for this prestigious first race of the season," he added, details of who will make up that "broader group of fans" only made clear in the terms and conditions.

"I am thankful for all the support we receive from across Government in Bahrain and the coordination that makes Bahrain a successful F1 every year.

"I especially thank The National Taskforce for Combating the Coronavirus and Ministry of Health in Bahrain for their planning and guidance, which will allow us to offer a safe experience for fans.

"We would urge eligible fans to reserve their tickets now for the best possible seats to witness the first edition of F1 2021."

Of course, the 23-date schedule is one of the few things team bosses have not been willing to discuss at the launches, and behind the scenes it is understood that panic is building.

Only yesterday it was announced that the Le Mans 24-Hour race has been postponed from June until August, as, under the current restrictions, fans would not be allowed access for the second year running.

While sporting events are allowed in France, it is on the strict understanding that (currently) only 5,000 fans can attend, and even then with strict social distancing measure in place.

Indeed, Bahrain will see those fans attending forced to wear masks and face screening on entry to the track.

The stark reality is that, what with the uncertainty over the virus and its variants, and the ever-changing restrictions on travel, after the season-opener nobody really knows what happens next.

With the sport have suffered a record loss last year, it cannot repeat 2020 in essentially hiring venues on which to race, it needs hosting fees.

Meanwhile, an added problem for the sport is the increasing unrest from the media, with journalists once again denied access to the paddock and confined to the media centre.

Already, broadcasters and the press are waking up to the fact that there is no point sending journalists around the world to attend races when the only access they will have to team bosses and drivers is through online press conferences.

Last year, the BBC only attended one race, the British Grand Prix at Silverstone.