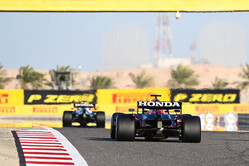 Forever talking down their chances, for once Mercedes might genuinely have something to worry about as Max Verstappen and Red Bull end testing on a high.

With monotonous regularity we have become used to various members of the Mercedes team talking down their chances, portraying themselves as underdogs whilst the poles, wins and titles mount up.

However, following a far from convincing pre-season test that saw rivals Red Bull take a clear step forward, for once the world champions might genuinely have something to worry about.

As the clock ticked down this evening and Lewis Hamilton struggled to get within a second of Verstappen's pace, the Dutchman traded fastest times with AlphaTauri rookie Yuki Tsunoda, suggesting that Honda has taken a major step forward in its final year as a manufacturer.

As ever, many questions remain unanswered, but while Mercedes has failed to convince at any stage over the past three days, Red Bull has quietly got on with the job in hand, demonstrating that it is prepared to fight for honours from the get-go rather than accept the usual game of catch-up.

As Verstappen traded best times with Tsunoda, on mediums, on a woefully scruffy lap, the RB16B looked brilliant, while his final flyer on C4s saw the Dutchman go quickest in the second sector, the most demanding part of the Bahrain track.

Perez was behind the wheel of the RB16B this morning, posting a total of 49 trouble-free laps, during which he sampled the softer compounds for the first time on his way to a best time of 1:30.187.

"It's crazy to think that pre-season has already finished," said the Mexican, "it feels like it only just started. I think this is the shortest pre-season ever in my career!

"There's a very limited amount of running and testing but we managed to work through a lot of set-up options and are improving every time we get into the car. I'm very excited about the season and I think we've got a good car underneath us but I still have a lot to learn in the car to get the maximum out of it.

"The team is doing a fantastic job. It doesn't really matter where we start in Bahrain, it matters where we finish in Abu Dhabi. Now we just want to look forward to the race weekend. We're going to take it step by step and be patient in the beginning and then things will come to us."

After working through a busy programme mostly focused on medium compound tyres, Verstappen also sampled the softer compound late in the afternoon to claim the fastest time of the three-day test with a 1:28.960.

"It was another good day and we got through the whole programme," said Verstappen. "Conditions were a bit different to day one so we had to adjust the car a bit as we went along but from our side it was very smooth, as it has been throughout the whole test. I think we can say it has been a good weekend but of course that doesn't give you any guarantees and all teams are doing different programmes at testing.

"We always look into what we can improve and for sure there are still things we want to work on but I think all teams will have that. We'll find out for sure in a couple of weeks in Q3 where we really are but in general I would say the car feels good and I'm looking forward to going racing."

"Both sessions today were identical in terms of run plan," added head of race engineering, Guillaume Rocquelin. "As opposed to the first couple of days, today was more about trying to optimise the car and understand where we're going, so shorter runs, more set-up items, a bit more time in the garage.

"We were still doing some development work but also really getting the crew and the drivers up to speed in terms of procedures and pit stops. It was a similar plan for both drivers and similar results for both.

"Overall, this has been a positive test phase. Three days are never going to be enough; I don't think anyone would say they are, but in terms of the time available, what we got out of this test was very useful. We've got a really good base to build from and we're looking forward to coming back to Bahrain in a couple of weeks."

Sister outfit AlphaTauri has looked strong from the outset, but today the Faenza outfit gave further insight into just how competitive it might be this year, something which should worry the likes of Ferrari and Aston Martin.

As for Tsunoda, did someone forget to tell him that he's a rookie? Make no mistake, this little guy isn't on board as part of a sweetener to keep Honda happy, he is clearly the real deal, and shaping up to be a genuine star.

Around an hour into the afternoon, Tsunoda lost the AlphaTauri in Turn 7, almost collecting Kimi Raikkonen in the process. Replays suggest that he could have been caught out by the dirty air as he prepared to pass the Finn, but despite the hairy moment the Japanese youngster was the epitome of calm.

"Jumping out of the car in P2 today is a great feeling," he said at session end, "of course you can't get too ahead of yourself, as it's only testing, but it's great to finish the three days on a high. I've learnt so much over the last few days and collected crucial data for the team that we'll now go back and analyse ahead of the first race. I think for me it's great that we're returning here so soon for the start of the season as I've managed to complete a lot of running here now and understand the track well.

"We've had a few small teething problems but that's exactly what you'd expect from testing - we're here to work everything out so we have the best possible package available to us come race day. I'll continue working hard over the next few weeks and I'm excited for it to start!"

"Now that the three days of testing are over, I can't wait to start racing," added teammate Gasly, "we've managed to complete our full testing schedule and have a good understanding of everything. Preparing for the race, we know the car's strengths and we know where we can still make some improvements. I feel confident in the car and I think we're in a much better place than we were this time last year. I think we know where we'll be fast, and we have understood how to work on the car further. I really hope we can be in the fight this season and get some good points.

"Honda have also done a great job with the Power Unit and so far, we're really happy with it - it's a strong step forward, compared to last year, and the reliability has been perfect all three days, which is really positive. I'm excited for us to get to qualifying at the Bahrain Grand Prix because I think that's when we'll really see what everyone can do."

"We concluded a positive third - and final - day of pre-season testing here," said technical director, Jody Egginton, "racking up an impressive 422 total laps (2283.86 km). Following two days of changeable conditions, today marked the first day of calmer weather - and cooler track temperatures - for both drivers. Starting in the morning session, Pierre continued to add to his impressive mileage tally, amassing a further 76 laps before the lunchbreak. Meanwhile, Yuki spent the afternoon finishing his testing plan with a race simulation, before finishing the test on a high, achieving a strong second place as the chequered flag fell.

"Over the course of three days, the team completed a successful testing programme - including a vast amount of aero testing, with rakes fitted, and collected a large amount of data that the team will now analyse ahead of the first race again here in Bahrain at the end of the month. Following running, the team remain cautiously optimistic about the performance of the car but will now return to the factory to further understand the level of correlation between wind tunnel data and performance on track."

"We closed the test here with another fantastic day," added chief race engineer, Jonathan Eddolls, "and were able to cover all of the planned items. Pierre drove in the morning, with the focus on further setup items, to help improve the balance. We've managed to complete tests that we wouldn't normally have the luxury of conducting on a race weekend, so it's been a great opportunity for us to populate our database. Furthermore, we've been able to increase our understanding of the new 2021 tyre compounds over some long runs.

"We swapped to Yuki for the afternoon, where he had the opportunity to undergo his first, and only, race simulation before the season starts. This was crucial for him and particularly allowed him to learn more about tyre management techniques. The day ended for Yuki with some performance running, as the track temperature and wind dropped. The conditions meant that the track was the fastest of the three days and therefore flattered lap times somewhat. Both drivers have been very consistent and put in really good performance so, as a team, we are very much looking forward to returning here in two weeks to see the real classification and get back to racing!"

"We've had three really good test days," said Franz Tost, "and we managed to complete 2,284 km in total. We've learnt a lot about the car because we managed to complete so many laps. Both drivers did a fantastic job across all three days, Pierre was very consistent in every session and Yuki performed very well this afternoon.

"The AT02 seems to be competitive, but we won't know how representative this is until the first qualifying session here in Bahrain. I would like to thank everyone in the team for the good job which has allowed us to get us into this position and we're looking forward to the season ahead. I also would like to thank the organisers here at the Bahrain International Circuit for such a warm welcome and for organising a great test."