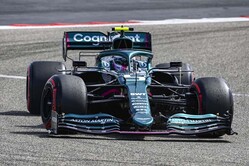 Out of respect to the manufacturers, Sebastian Vettel refuses to compare the Mercedes power unit with Ferrari's.

Like Daniel Ricciardo, Sebastian Vettel finally gets his hands on the all-conquering Mercedes power unit this season, however, asked by reporters to compare the two the German refused, citing respect for the respective manufacturers.

"It's obviously different," he admitted, "but I'm not going to compare, just out of respect to different manufacturers. It's something that I've never done in the past and I won't do now."

Having struggled with Ferrari over the past couple of seasons, suffering a number of unexplained spins whilst battling with rivals, asked how the Aston Martin compares with a Ferrari that he often found at odds with his driving style, again the four-time world champion was giving little away.

"Again, I will not disclose too many details," he said. "But we will have the car that we have underneath us and we have to adapt, so I think that's not a problem. I'm sure it's fine.

"We work very hard to ensure we have a quick car," he added. "It will be a long year, a tricky year to split the resources for this year and next year. Lots of challenges but the main challenge right now is to have a decent test."

Despite losing valuable track time earlier due to a gearbox issue, the German remains confident.

"The last 24 hours have certainly been very busy for myself, for everyone in the garage, for the whole team," he said. "Unfortunately we didn't have a very productive morning, we had an issue with the gearbox we had to change and that cost a bit of time.

"That's what happened and unfortunately we didn't get a lot of laps in. So this morning was not of great use in terms of track time.

"Yesterday though was very interesting," he added. "The car feels very promising but there's still a lot of things I need to get used to. The car is different to what I ran last year and it's a different power unit as well so everything feels a bit different and takes a little bit of getting used to."

Check out our Day 2 pre-season test gallery from Bahrain, here.