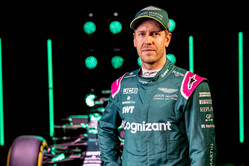 Admitting that he is not happy how things went in 2020, as he faces up to a whole new challenge Sebastian Vettel says he is not interested in what his critics think.

If 2020 was an Annus Horribilis for Ferrari, it wasn't much better for Sebastian Vettel. Even before the (delayed) season got underway the German knew he was going to be out of a job, as Ferrari sought out Carlos Sainz to partner Charles Leclerc.

In a Hollywood movie Sebastian would have gone out and blitzed his teammate in a bid to show the Maranello outfit what a huge mistake it was making, whereas the reality of his performances suggested the Italian team had made the right call.

Though he failed to emulate his great hero, Michael Schumacher in putting Ferrari back on top, Vettel now has the chance to realise a dream for another legendary manufacturer, Aston Martin.

While Helmut Marko, who oversaw Vettel's rise through the ranks and his four F1 titles insists that he hasn't forgotten how to drive, the German's critics claim that 2020 was proof he is a spent force.

"I obviously thought about it a lot last year, during the season," he said, "and I'm obviously not happy with how last year went in terms of performance, partly my performance.

"I don't have any regrets," he added, "obviously there are things that didn't go well and things I would have liked to go better, differently and so on, but ultimately I'm very much looking forward to this year.

"I'm very much at peace with last year," he insisted. "I know that it hasn't been to my standards that I mostly hold myself, but I've never really cared what people say or think or... sorry, write, but that's why I think it's important I'm at peace with that myself, and very much looking forward to this year, and having very, very high expectations myself."

Asked if the criticism might spur him on, he replied: "I'm not interested in what people think. I think it's more about making a point to the team, to myself rather than the people. Our world is moving very fast and the world has to move on fast or quickly which is healthy and good. I am pretty sure when I say goodbye to Formula 1 I will be forgotten very quickly and that's OK, I think that's healthy.

"That's why also I am not too bothered about proving a point to people and really just focusing on my own bit, which right in front of me, is myself. Hopefully it doesn't sound too egotistic or arrogant but it's myself and the team around me that matter.

"If anything, in the wider bigger sense, it is the people who support me and have given me so much in the past ten years, and have stood beside me no matter the last result.

"I think F1 is moving very fast. Not just literally, in terms of speed but also moving on fast, therefore you always get judged on the last couple of results.

"You can come from nothing and be a hero by having a couple of good results or in my case, more than fifty wins on your side and people think that you're just average. It's how it goes."