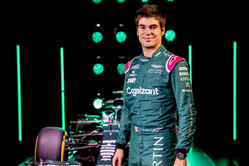 Following his most successful season to date, Lance Stroll is targeting fifth in the 2021 standings.

If the midfield battle between the constructors thrills, what about the honour being the 'best of the rest' driver.

Before a wheel has turned it's fair to say that the Mercedes pair have the top two spots reserved, while Max Verstappen and Sergio Perez will be determined to claim third and fourth.

What we can expect from McLaren, Aston Martin, Alpine, Ferrari and AlphaTauri remains to be seen, but Lance Stroll aims to come out on top of his rivals.

Last season he recorded his best finish, 11th in the standings. And while he claimed his maiden pole in Turkey and a podium at Monza, various incidents and issues left him 50 points adrift of his teammate, Perez who finished fourth, despite missing two races compared to Stroll's one.

This season sees the youngster pitted against four-time world champion, Sebastian Vettel, a man with his own point to prove, his own critics to silence.

"I've just turned 22, so I think still I have some time ahead of me," said Stroll in the moments following the unveiling of his new car. "It comes down to a lot of things, the experience is a big part of it, learning from experience, proving yourself as a driver.

"Last year we were sitting fourth for such a long time and then had some misfortune that set us back, but it goes to show that the potential is there if we just execute it and focus on the job."

Part of the misfortune he referred to no doubt included Turkey, where he led much of the race from pole before being compromised by a damaged floor.

"There are areas in my mind, with my craft and the car setup, that I can tie them together and do a better job and get more out of myself," he said. "When I look back to last season, there was a lot of potential and a lot of good things, and other areas to work on.

"If I look at Turkey, we had a chance to win the race, but because of a small floor contact, that lost the car a chunk of floor, and threw our race in the trash, so you have to accept the way some races unfold.

"But if I'm to focus on one thing, it's to keep pushing myself further, learn as much as I can and improve on some of my weaknesses, which are changing from one race to the next."