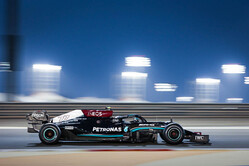 Though we have grown used to Mercedes habit of playing down its chances, over the last three days the German team has genuinely appeared to struggle.

While it is not the "horror show" that some headline writers would have you believe, it is clear that issues with the W12, not to mention the obvious step taken by Red Bull, suggest the world champions have a fight on their hands this year.

Aside from technical issues such as the gearbox change on Friday, the W12 doesn't appear to sit as well as its predecessors, while both Valtteri Bottas and Lewis Hamilton have had 'moments' in the car which can't all be put down to the wind.

"It's a bit more windy conditions than we've had normally at the race," said the Finn at Sunday's press conference, moments after his pre-season running had come to an end. "But still, I would say one of the big issues with the car is the rear end... it's quite snappy and it's quite unforgiving.

"That topped up with the new tyres, that they feel quite sensitive to the sliding, it's not that easy," he added. "We are kind of trying to calm the car down a bit and that way trying to get some more pace."

Though quickest on Saturday afternoon, albeit on the C5s, by the end of testing he and his teammate were both over a second off Max Verstappen's pace, the Dutchman having posted his best on the C4s.

"We've made a bit of progress with the balance on higher fuel and the car was more predictable," said trackside engineering director, Andrew Shovlin at the end of testing, "but we can see from the data we've collected over the last few days that on race pace, we're not as quick as Red Bull.

"The lower fuel work was a more confusing picture," he admitted, "we didn't gain enough and we need to go and look at our approach as far too many cars were ahead of us on pace today.

"We've had issues in recent years with pace in winter testing and managed to make good progress before the first race but we may have our work cut out this time. We've not got long before we're back here for the race so we've planned a programme of work to try and understand some of our issues and will be leaving no stone unturned in our efforts to find some more speed over the next ten days."

Ahead of testing, the German team had been extremely coy in terms of how it had dealt with the aero regulations introduced over the winter, going to great lengths to hide its new floor and refusing to say how its development tokens were used.