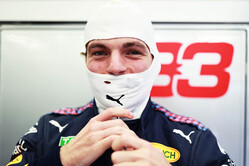 Max Verstappen has played down speculation that he heads into the season opener as favourite, insisting that Mercedes remains the benchmark.

Having posted the fastest time in pre-season testing, and with his car looking to be a better package compared to the "snappy and unforgiving" Mercedes, it is not surprising that Max Verstappen heads into next weekend's season opener as favourite.

However, we've been here before, the German team comes away from testing having failed to impress before promptly destroying the opposition when it really counts... on Saturday afternoon in qualifying and again the following day.

Max Verstappen certainly isn't being lulled into a sense of false security, the Dutchman insisting that Mercedes remains the team to beat.

"You can see on the data, of course, what they are doing," he tells Ziggo Sport. "They did their fastest lap with less power, and then two laps taking it easy… then the next lap with half a second more power from the engine.

"So they are fast, no doubt," he continues. "Of course they try to push us into the favourites role, and then when they are up there again it's all genius!

"They did the same last year at some of the races... on Friday they said, 'Red Bull looks very strong' but deep down I knew that wasn't the case. Then on Saturday they're there again and it's like, 'Oh, wonderful!'"

Despite the Dutchman's understandable scepticism, this time around, whatever Mercedes might be holding out in terms of power, there does appear to be a problem with the W12's stability, an issue that is mainly attributed to the team's reaction to the new aero rules in terms of the floor.

"If you have been so dominant in the last seven years and you have such a dominant car, even if you have the worst floor under your car, you are still good," says Verstappen. So I still see Mercedes as the favourite.

"For seven years in a row they've won everything, so I don't see myself as the favourite at all," he insists.

"I am happy with what we did during testing, and I am happy with the balance of the car," he admits. "Whether it is good enough? No idea. We'll see in Q3.

"It's normal that they're the favourites, isn't it?"