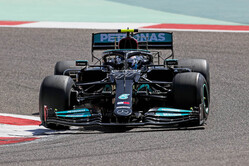 Cast your mind back twelve months and most of the headlines relating to Mercedes following pre-season testing were doom and gloom, though the German team went on to score its seventh successive brace of titles almost with ease.

A year on, and on the back of a test that once again saw the German team fail to impress - and rivals Red Bull look very strong - it is once again being claimed that the Brackley-based outfit is struggling.

World champion Lewis Hamilton has admitted that he is likely to be under pressure from Red Bull, McLaren and even Alpine, while Valtteri Bottas describes the W12 as "snappy" and "unforgiving" and even Andrew Shovlin admits that the team may have "its work cut out" this year.

Other than a lack of pace, the team lost valuable track time over the course of the three days with a number of issues. One of the only teams not to take advantage of the filming day rule - and previously Mercedes has taken to the track a couple of hours after the car's launch - many have questioned why the German team didn't carry out its customary shakedown and thereby check for some of the more trivial yet costly issues before testing.

"The shakedown, if it's done in the right conditions, allows you to understand a little bit more," admits Toto Wolff, "but our failures in the first days were not down to doing or not doing a shakedown.

"I always worry, sometimes for the right reasons, sometimes for the wrong reasons, but pre-season testing is always exciting because you always find the hair in the soup," he said in reference to the test, "things that are not good and we had quite some struggle in the first few days.

"It's not a matter of complacency," he insisted. "There's a reason why there are not many teams winning world championships or doing it with consecutive championships. It's an organisation that needs to stay energised and motivated at all times, and that's not trivial."

Asked how the team will now prepare for the season opener and the battle that appears to lay ahead, he said: "On the job list is that we will crunch the data. Try to understand where we performed well, and where not, where we had good correlation to our simulations and the tunnel and where not.

"It's like sleeping overnight on an idea," he added. "Next day you wake up more intelligent."