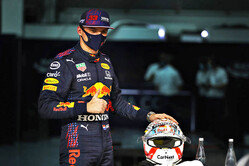 So here we are, after a couple of weeks of endless 'what we have learned' articles, we're finally going to get some idea of the truth.

Over the next hour we are going to learn who's hot and who's not, who has been feeding us BS and who hasn't.

On the evidence thus far, having previously dominated pre-season testing, it appears Red Bull and Max Verstappen have the advantage.

However, as has been pointed out so many times in the last two weeks, Mercedes has seven successive braces of titles to its credit, so it would be extremely foolhardy to think its reign is about to come to an end.

Even if the car is, as Valtteri tells us, "undriveable" at times, the German team has the experience and resources to get on top of the situation, therefore, even if it does lose out today, we can expect the Brackley-based outfit to come back at Red Bull in the months ahead.

Despite its strength in testing and over the course of this weekend's practice sessions, Red Bull is taking nothing for granted, and why would it, for Max and his team are aware that the Black Arrows is more than prepared for the long haul.

And so to the midfield, a veritable minefield of misinformation, conjecture, confusion and outright intrigue.

Sticking our necks out we'll say McLaren is at the front, possibly even snapping at the heels of the 'big two', ahead of AlphaTauri and Ferrari.

In terms of confusion, Alfa Romeo looked good in testing and again this weekend, but has the Italian (Swiss) team really taken such a significant step forward?

The two big disappointments thus far are Aston Martin and Alpine, though both have a reputation for coming back stronger as the season progresses.

However, where that falls apart is the massive overhaul of the rules next season, which means that teams simply cannot afford - literally - to run significant development programmes alongside their preparations for 2022, so at what point does the call go out to call time on 2021?

While Haas has clearly written off this season, one only has to think back to Alonso in the Minardi to know that a great driver can still impress with a crap car, and the early signs are that Mick Schumacher is aware of what he has let himself in for and is prepared for the long, hard slog that lies ahead.

We're not quite sure to make of Williams, for while testing went quite well, the FW43B hasn't impressed so far this weekend. Then again, like the aforementioned Mr Alonso, that doesn't usually prevent George Russell pulling the odd surprise or two.

And as if the overall team order isn't enough, there is the added bonus of the various in-house battles as teammates old and new seek to establish themselves.

The lights go green and the quartet of drivers most likely to miss the cut are first out... Russell followed by Schumacher, Mazepin and Latifi.

In the first sector, Latifi is quickest, while Russell opts to abort his lap. Mazepin spins in Turn 13 as three of the drivers pit without posting a time. Schumacher gets proceedings underway with a 33.861.

At which point Norris, Hamilton, Bottas, Sainz, Raikkonen, Perez and a whole host of others head out.

Indeed, suddenly there are nineteen drivers are on track, Schumacher having pitted.

Norris posts 31.754 but the timing screen is about to go crazy as his 18 rivals post their times.

Leclerc goes quickest, then Sainz, then Bottas then Hamilton, the Briton crossing the line at 30.617.

Perez splits the Mercedes with a 31.165, only to be demoted when teammate Verstappen posts a 30.499.

Alonso goes twelfth while teammate Ocon is down in 16th.

Surprisingly, the Alfa pair are 14th and 15th.

Verstappen asks his team to check his floor after running wide in Turns 2 and 3.

As they head out for a final run, Hamilton is one of several drivers to stick with used softs. Verstappen and the Alphas don't appear to be coming out again.

Lots of greens in the first sector with Russell, in particular, looing set to improve.

As issue for Sainz, who stops on track before getting going again, the Spaniard having complained of vibrations after running over the kerb at Turn 2. Like Mazepin elsewhere on the track, this brings out the yellows.

Ocon goes 15th but is demoted when Stroll improves, while Vettel appears to have lost out following Mazepin's spin and the resultant yellow flag. Ocon also.

At which point the stewards announce that a number of lap times will be investigated... after the session.

The Mercedes pair lead Verstappen out for the start of Q2. As more drivers head out there is a mixture of mediums and softs. The Mercedes and Bulls are on mediums, while the Ferraris are on softs.

Bottas sets the early pace in S1, while Tsunoda is building a head of steam on his out lap.

Norris goes fourth, ahead of Sainz, Leclerc, however, Perez and Ricciardo have their times deleted.

Consequently, behind Norris, it's Sainz, Alonso, Leclerc, Gasly and Tsunoda. However, the Ferraris and Alonso are on softs.

With just over 5 minutes remaining, Russell has the track to himself. The Williams driver is on softs.

Currently, Giovinazzi, Raikkonen, Russell, Ricciardo and Perez comprise the drop zone, the latter two yet to post times after their previous times were deleted.

Hamilton, Bottas, Gasly, Tsunoda and Perez stick with the mediums. Verstappen appears to be on softs.

A string of expletives from Perez, who misses the cut, along with Giovinazzi, Tsunoda, Raikkonen and Russell.