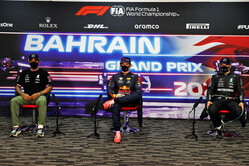 Max, you've started as you finished in Abu Dhabi last year, with pole position. But this is the first time in your Formula 1 career that you have been top of the times in every single session. It's real; this championship battle could be on.
Max Verstappen: Yeah, of course we already had a great test week. Of course there are no guarantees, but then we came back here for the race weekend and the whole week so far the car has been working really well. It's been really enjoyable to drive. Of course with the wind changing a lot around every session it's not easy to set up the car. It all worked out perfectly in qualifying and of course very happy with pole position.

I can see some sweat on your brow. It is hot here in Bahrain but you obviously had to work for that. That last lap time, where did you get that from?
MV: Well, basically my first lap in Q3 wasn't amazing so I knew there was more in it. Of course, you never know how much but yeah, finally the balance was there and you can push a little bit more. The track is quite hot so you have to be careful with not overheating the rear tyres but luckily where it mattered we could perform.

Thinking about the race tomorrow, how has the balance been on longer runs?
MV: It's been alright. In general the car has been working really well on short and long runs, so I'm just looking forward to it. We have a good car and now we just have to hope that we have a good clean start and first lap.

Just a closing thought for you. Of the last eight seasons, the world champion has come from pole position in six of those. It could be a dream year?
MV: Ah, there are no guarantees. We have to keep on pushing very hard but it's of course a great start and also I think a nice birthday present to you.

Lewis, you've always said you love competition; you've got it.
Lewis Hamilton: Yeah. Oh, amazing, Well, congratulations to Max he did such a great job, so fast on that last lap. I absolutely gave it everything I had but unfortunately it wasn't good enough.

That's very interesting, you're basically saying that was it, that was the maximum pace, there was nothing left behind?
LH: Yup.

Wow! This is real.
LH: There's always more but that was the best I could do for sure. I got absolutely everything I could from the car. I think we did a really good job from testing to come here, the lads back at the factory have really done such an amazing job and like our aerodynamicist, Kim, she has been giving us such great information for us to be able to improve and get the car to where we needed it to be closer to the Red Bulls. I think to be that close... considering I think in testing we thought we were a fair way behind.

And finally, Valtteri…
Valtteri Bottas: Happy birthday! Should I sing?

Thank you, but please don't! Valtteri, we have seen you training hard over the winter, you say you have been really working on the preparation for the year ahead. It doesn't seem you've really found harmony with the balance of the car, so where is your mind at having qualified third?
VB: The practice this morning wasn't quite easy. I had a lot of issues with the balance of the car and didn't really feel that comfortable and I was hoping that maybe the evening session was going to be a bit better. It was a bit better. Q1 we went out for a second run with the soft tyres, which meant we kind of wasted a tyre set. In Q3 I only had one set of new tyres and it was tricky to compete Max and Lewis with just one set. It wasn't too bad but obviously not where we wanted to be but at least starting third and from there anything is possible and the aim is only for tomorrow.

Yeah, you can still win from there, that is clear. Can you give us an insight as to what we may see tomorrow in terms of the strategy on tyres and the pit stop windows?
VB: Yeah, it seems like us and Max are starting on the medium tyre so I think strategy-wise there is nothing huge. I think we have more hard tyres for the race. I can't reveal much more. Of course we have two cars in the mix at the front against Max so I think we can co-operate and do something good.

Max, many congratulations, that was a realty exciting qualifying session to watch, how was it inside the cockpit?
MV: Yeah, I mean, in general so far the whole weekend has been pretty good. But the wind is changing all the time, which is not so easy on the cars, so you really have to pay attention to that from Q1. Q2 was quite stable but it was all about not making a mistake in Turn 1. It was alright. In Q2 we went to the medium tyre so we qualified on that and then getting into Q3 it was just getting your references back. The first lap wasn't amazing but the second one was a good lap and of course very happy to be in pole position and it just shows that the guys, after the end of last year, just keep pushing really hard and the adjustments that have been made to the car they have done a great job, so really happy for the whole team.

And Max can you describe what it feels to take pole position at the first race of the season? You've proved that the pace is real. It there a sense of relief within Red Bull Racing?
MV: It's not relief. That's what you always aim for, right? Of course in the last few years it hasn't really materialised, but in a way the regulations haven't really changed a lot and we knew what our weaknesses were last year and it seems like we addressed them so far at the beginning of the year and yeah of course very happy with that. Great start for us but of course no guarantees for the future but of course very happy so far with the whole weekend.

Max, just a detail question about the session. We saw you run over a kerb in Q1 - was there any damage to the floor after that?
MV: Q1, yeah, I ran a bit wide. I think there was a little bit of damage but we're still fine.

Lewis, coming to you, it was close on the timesheets - was it closer than you expected after winter testing?
LH: Yes, definitely closer than we expected. I think this is a really good step forward for us. Coming in this weekend we thought it was double the gap that you see today and so that's really down to some really fantastic work from the men and women back at the factory and people here, for example like Ashley, who is a new guy on my car, who's just doing a fantastic job. So, just collectively, just all pulling together.

What was the car like to drive? How much have you improved it since the test? Where have you improved it?
LH: It's hard to do a huge amount. There's been no development; it's just really been about fine-tuning the car and trying to understand the envelope that we have. It's different to last year's with these changes, and so we're down in certain places but it's going to take some time to catch those up, but might be specific to here and not elsewhere, maybe.

And final question from me Lewis. Do you think you've got the pace to challenge the guy on your left in the race tomorrow?
LH: I think, it will be difficult to say. I think they've got the pace gap they have today, usually they carry that through into the race, they're very strong in race conditions. I'd like to think we can close up a little bit but I think they've got at least two-tenths in hand.

Valtteri, coming to you. It seemed that your pace improved throughout the session. Just talk us through it and where the car improved from Q1 to Q3.
VB: Yeah, first of all the practice this afternoon was quite tricky. I didn't really find a good balance with the car so we've made more changes for the qualifying. The first one of qualifying actually felt OK but the lap time wasn't quite there, so we went again with a new tyre set in Q1, which I kind of disagreed but we basically wasted the tyre set so in Q3 I only had one run with the new tyres. It was not really an optimal qualifying for me. But throughout the qualifying, my pace really, my confidence within the car and the feeling with the car and the understanding of the wind was improving, so it was getting better and better. Max today was out of reach. Even with one new set, I think the quali felt like a nice lap and a decent comeback from a trickier session earlier on and at least now we have two car in the top three so I'm sure we can do something good with that.

(Alex Kalinauckas - Autosport) Max, you said at the start of Q3 that that first lap didn't feel amazing, this was all about getting the references back and obviously you went quite a lot faster on the second lap, so what did you do differently once you'd got your eye back in? What was the difference between the two laps? Thank you.
MV: I just had a few corners where I had a bit of loss of grip and then, of course you run a bit too wide and have a bit less traction. It's just tidying those things up - and that helped a lot. This track is super-sensitive to how the tyres behave anyway - like you can gain or lose a lot of lap time, and especially when the wind is in the direction it was during qualifying, that can make a big difference and that's what basically happened between my first and second lap.