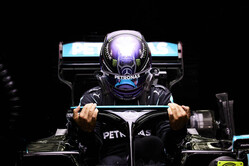 As Max Verstappen confirms the RB16B's pace is for real, world champion, Lewis Hamilton claims that 2021 rule changes are another attempt to handicap Mercedes.

After weeks of speculation, Saturday's qualifying session finally gave us an idea of the pecking order in the opening phase of the season, and, as witnessed in testing, Red Bull has the edge on Mercedes.

Though the German team has taken a clear step forward in the little time that followed testing, the fact that Max Verstappen grabbed pole by 0.388s - with floor damage - says it all.

Throughout testing the Mercedes drivers struggled, particularly with the rear of the car. Having previously described the W12 as "unforgiving" and "snappy" at one stage on Friday Valtteri Bottas described his car as "undriveable".

Speaking at the start of the weekend, team boss, Toto Wolff suggested that the rule changes this year, ostensibly introduced to reduce downforce levels were aimed at Mercedes.

"I think we've probably suffered more with the change of regulations than the cars with the higher rake," said the Austrian, who claimed that Aston Martin, which also utilises a higher rake, is similarly suffering, a fact confirmed by Otmar Szafnauer.

Speaking at the end of qualifying, Hamilton also pointed to the regulation changes.

"It's no secret that what the changes have... of course they've been done to peg us back," said the Briton.

"We had the changes of course last year to our engine to do the same thing," he continued, a reference to the rule forbidding changes to engine mode changes between qualifying and the race introduced late last season.

"But that's OK, we love a challenge and we don't look down on these things, we just work hard to be the best we can. And that's what we'll do."

"There have been a few factors," insisted Verstappen. "We knew our weaknesses from last year and that not only has to do with rake.

"I think also from the engine side I think Honda has worked really hard to improve their engine in general and I think they've done a great job."