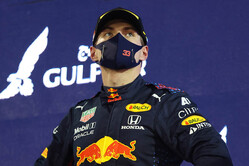 "Our balance wasn't that spectacular but it wasn't the worst run," said Lewis Hamilton following yesterday's qualifying session. "It's just that, with all the workings out, it looked like it was a couple of tenths difference between us but we will see.

"It definitely didn't look terrible," he added, "and it was a lot better than what I thought it was going to be in testing"

"Ah, we will find out tomorrow, during the race," responded pole-man, Max Verstappen.

Forget the hyperbolic headlines, the inane 'let's do this' tweets, for those nine little words were all you needed; the perfect riposte to the world champion and the long-anticipated throwing down of the gauntlet that F1 fans have been craving.

Before anyone accuses us of bias, of being "anti-Hamilton" or, God forbid, "anti-Mercedes", the fact is that, just like the 2000s when Michael Schumacher and Ferrari ruled, we wanted to see someone take the fight to the champions. Not just on a one-off basis under the right conditions, but to mount a sustained challenge.

After all, surely when we're talking 'greatest of all time', this is exactly what true champions desire, to take on all comers... and beat them.

Let's face it, with a number of teams looking likely to write-off this season as they instead focus on the massive rules overhaul of 2022, there was every chance that 2021 could become the sport's forgotten season, a year in which F1 was basically in limbo.

Not any more, for it appears that Max Verstappen, Red Bull and Honda may finally have a package with which to take on Lewis Hamilton and Mercedes, not forgetting their respective 'support acts'.

Of course, what we don't want is for today's race to be decided at the first corner, though this is a track that has history, not least just a few short months ago.

With Sergio Perez failing to make it through to Q3 courtesy of the wrong tyre strategy, not for the first time Verstappen finds himself without support as he takes on the might of the Black Arrows.

That said, Perez is a canny driver, and with the right race strategy will hopefully become a factor as the race progresses.

Verstappen, as we now know, posted his pole-winning time with a damaged floor, Christian Horner claiming that the damage cost the Dutch youngster around a tenth-of-a-second. The floor has since been changed without penalty. The team has also changed the Energy Store and Control Electronics on Perez' car.

Red Bull might have the edge on outright pace - and handling - but never forget that Mercedes has won both titles for the last seven years, winning 73% of the races held thus far over the course of the hybrid era.

Furthermore, Hamilton relishes a fight - as does Max - and there is no doubt that both men will be anticipating today's showdown (and beyond) as much as we are.

But as if this wasn't enough, we have the prospect of a titanic battle for supremacy in the midfield, indeed a couple of teams might even envisage taking on the likes of Bottas and Perez, such is the breadth of talent and potential ferocity as individual drivers and their teams seek to establish themselves.

At McLaren, Daniel Ricciardo got his season off to the best possible start by out-qualifying teammate Lando Norris, and despite the grin the Australian will want to ram home his superiority this afternoon.

Another star of qualifying was Charles Leclerc, who once again flattered to deceive the equipment at his disposal.

Then there's Pierre Gasly, now a proven winner, and another driver with a point to prove, not least to his former employers.

And, of course, there's Mr Alonso, who can always be relied on to give 100%, not forgetting fellow world champion, Mr Raikkonen, whose team appears to taken a decent step forward over the winter.

Those drivers starting out of position, for whatever reason, include the aforementioned Perez, Yuki Tsunoda and Esteban Ocon, while poor old Sebastian Vettel faces yet another long afternoon.

We could go on - and on, and on - and fall into the annoying habit of broadcasters and the like who insist on bigging-up every aspect of the afternoon ahead of us, but the truth is there genuinely is something to be excited about, whether one is talking about the front row, the midfield, the rookies, the veterans or the stragglers... this really has the potential to be a great start to a great season. And after all, isn't that what we deserve?

Previously, the Bahrain Grand Prix has proved to be one of the most strategically interesting races of the year, and this is likely to be the case again today. An incident-packed grand prix last year, with safety cars and red flags, means that there's little meaningful strategy data and the teams are effectively starting from scratch. The abrasive track surface with high degradation makes a two-stopper the most likely scenario - but the exact two-stopper selected will depend on each driver's tyre availability.

There are many two-stop strategies that are similar in terms of overall time, but the quickest in theory is two stints on the mediums of 18 laps each, plus one central stint on the hards of 21 laps: set to be the strategy for all those who set their best Q2 times on this tyre, Verstappen, Hamilton, Bottas and Gasly.

The second-quickest two-stopper uses all three compounds: the softs for 14 laps, the hards for 24 laps and the mediums for the final 19-lap stint.

A soft-medium-medium strategy is slightly slower: this would use the softs for 15 laps and then two sets of mediums for 21 laps each.

Another two-stopper uses two 16-lap soft tyre stints and one 25-lap hard stint (probably as the middle stint). This last strategy can be a favourable one with cooler conditions. In terms of overall time, that's similar to the above - and, as always, all permutations are possible.

With cooler conditions than the previous two days and the wind having picked up, this will only add to the keen sense of anticipation.

The pitlane opens and the drivers begin to head out. The air temperature is 20.8 degrees C, while the track temperature is 29.9 degrees. There is a strong headwind into Turn 1.

The drivers gather at the front of the grid for the We Race As One ceremony and the National Anthem.

Mazepin complains that he has water pouring over him

Other than Verstappen, Hamilton, Bottas and Gasly, Perez, Giovinazzi, Tsunoda, Raikkonen, Schumacher, Mazepin and Vettel start on mediums, the rest are on softs.

They head off on the warm-up lap, Hamilton pulling ahead of Verstappen.

Calamity... Perez has stopped on track before he even gets to the grid.

As the start is aborted and the drivers head off on another warm-up lap, Perez finally gets going. The Mexican heads to the pits from where he will have to start.

Once again, Verstappen leads the field back to the grid. On the front row, Verstappen and Hamilton both have their cars pointed inwards to the centre of the track.

They're away. Verstappen holds the lead into Turn 1 ahead of Hamilton, while Leclerc is on the inside of Bottas. Behind the McLaren pair battle for position in pursuit of Gasly.

As Verstappen leads the pack, further back Mazepin spins off and into the barriers at Turn 3.

Asked if he is OK, there is a long pause before the Russian eventually replies: Yes, I crashed. I'm so sorry."