"We will put as much performance onto the car as we possibly can," warns Red Bull 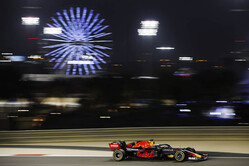 Despite the disappointment of the season opener, Red Bull is in no mood to lick its wounds, indeed, chief engineer Paul Monaghan warns that the Austrian outfit is aiming to ramp up its performance for Round 2.

Though the history books will suggest a clear case of 'same old', the fact is that for much of the Bahrain weekend, Red Bull appeared to have Mercedes on the back foot, if not quite on the ropes.

Indeed, having stunned Mercedes by taking pole, Max Verstappen looked all-set to follow this up with a famous victory until fate played a hand.

The wrong call on tyre strategy meant that at the start the Dutchman would have no support from his new teammate, Sergio Perez who was starting from 11th on the grid. Worse was to follow however when the Mexican suffered an issue on his way to the grid and was therefore forced to start from the pitlane, thereby leaving Verstappen to face the might of Mercedes alone... again.

Clever strategy from Mercedes, coupled with a masterclass in defensive driving from Lewis Hamilton, not to mention a controversial move by the Dutchman, saw Hamilton take a famous victory as Verstappen and his team struggled to understand where it had all gone wrong.

Rather than lick its wounds and continue wondering 'what if' however, the Milton Keynes based outfit is regrouping and is already ramping up for the next race, at Imola, promising a number of updates as it seeks to continue taking the fight to its German rival.

"Some developments are already in the pipeline for Imola, more for subsequent races," reveals chief engineer Paul Monaghan, "so it's now a two-pronged fight.

"We need this car to be put down on the ground and run and give us no hiccups," he continues. "We will put as much performance onto the car as we possibly can by Imola.

"Our destiny is in our control," he admits, "and we can't influence what Mercedes, McLaren, Ferrari and everybody else want to do. So we've got to remain focused."

However, while most teams are already beginning to switch focus to 2022, Monaghan is aware that Red Bull's German rival is relentless and will aslo be working flat-out to restore the status-quo.

"We've identified some areas where the car can be improved and we concentrate on those," he says. "We can't influence what the others do, so we've got to develop it, we've got to make it bulletproof.

"It's not all about going to Imola and chalking a win up on the board to say 'oh we're world champions', that's not going to happen," he admits. "It's going to be a long fight for a long season, and it's not won and lost here.

"There's a sense of disappointment in the garage, which is felt by all, but we've got a quick car, we've got a fantastic pair of drivers, we've got a good team and everybody's aware that we're going to be challenging all the way through."