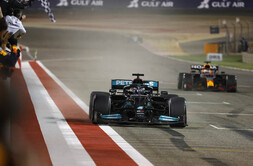 Mercedes technical boss, James Allison reveals that the team's live simulation tools were as mystified as the rest of us when it came to predicting the outcome of Sunday's thrilling battle between Lewis Hamilton and Max Verstappen.

"It was one of the most thrilling, nail-biting, sort of, chest-bursting experiences that I have ever had at a race track," admits the Briton in the team's post-race debrief video.

"But all those tools were of no help," he admits, "they were making a prediction that was changing with about every two or three seconds, it was saying Lewis was going to win, then it would change its mind and say that Max was going to win but honestly you didn't need the software to know how tight it was and all of us were holding our breath, crossing our fingers, crossing our toes and just hoping with everything we had that Lewis would be able to hang on to the end."

Eventually, it was Mercedes aggressive gamble on tyre strategy and Hamilton's superb defensive driving - not to mention a controversial move by Verstappen - that won the day.

"That he did so in such style, that he did so with such inch perfect positioning of his car at Turn Four when Max had that one go at him, that he did so with that degree of class just added to the thrill of it all," says Allison, "and when he finally crossed the line there was an outbreak of mass hysteria in our garage with the utter, utter delight of it.

"Last year, we managed to win lots of races with a very strong set of performances but there will be very few races as memorable as the one that we enjoyed in Bahrain."

Meanwhile, despite twice stopping earlier than Verstappen, Allison insists that the team never intended a three-stop strategy for its driver.

"The honest answer is absolutely no," he insists. "Three stops would have been instant death at that track, far, far too slow a strategy.

"We were just making the absolute maximum of what the hard tyre could offer us, and three stops was never something that we considered."