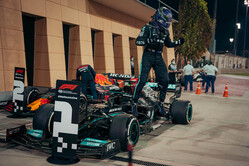 With Turn 4 track limits never far from the headlines over the weekend, ultimately providing the defining moment of the race, the FIA's Michael Masi sheds light on the rules.

Shortly after Friday's opening practice session, the FIA U-turned on the previous directive sent out by Race Director, Michael Masi and said that the track limits at Turn 4 had to be observed. Previously, drivers had been told that "the track limits at the exit of Turn 4 will not be monitored with regard to setting a lap time, as the defining limits are the artificial grass and the gravel trap in that location".

Shortly after the opening session however, it was announced that any "lap time achieved during any practice session by leaving the track and cutting behind the red and white kerb on the exit of Turn 4, would result in that lap time being invalidated by the stewards".

Note that this applied to the practice sessions and qualifying but not the race.

During the course of the race a number of drivers had their lap times deleted for exceeding the limits at the infamous corner, none more so than Valtteri Bottas who had his time deleted on no less than five occasions, while teammate Lewis Hamilton, Yuki Tsunoda, Esteban Ocon and Mick Schumacher each transgressed once.

However, when Max Verstappen exceeded the limits in passing Hamilton for the lead, as opposed to having his time deleted the Dutchman was forced to hand back the position.

As ever, the devil is in the detail.

Both versions of the race notes sent out by Michael Masi included the vital note that "in all cases during the race, Drivers are reminded of the provisions of Article 27.3 of the Sporting Regulations".

Article 27.3 of said regulations states that drivers "must make every reasonable effort to use the track at all times… and should a car leave the track the driver may re-join, however, this may only be done when it is safe to do so and without gaining any lasting advantage."

Note the all-important words, the terms and conditions if you will... "without gaining any lasting advantage".

"If an overtake takes place with a car off track and gains an advantage, a lasting advantage, I will go on the radio and suggest to the team that they immediately relinquish that position, and that was made very clear," explained Masi at race end.

"With regard to tolerance given with people running outside of the track limits during the race it was mentioned very clearly in the meeting (drivers briefing on Friday) and the notes that it would not be monitored with regard to setting the lap time, so to speak, but it will always be monitored in according with the Sporting Regulations that a lasting advantage overall must not be gained."

Referring to a radio exchange between Lewis Hamilton and his race engineer, Pete Bonnington, during the race, when, advised not to continue exceeding the track limits, the world champion queried whether the rule had been changed during the course of the race, Masi insists that "nothing" had changed.

"We had two people that were looking in that area at every car at every lap," he said, "and pretty much every car bar one was doing the right thing within what we expected in a general sequence.

"There was the occasional car that had a bit of a moment or went out there but it wasn’t a constant thing."

"Throughout the race I was told that people were going wide," said Verstappen at race end, "so they told me to do the same because you do gain lap time doing it, so I did, and then at one point they told me not to do it anymore.

"I don't know," he continued. "In qualifying it was not allowed, your lap time got deleted and so I don't know how it got to the point where people were doing it without getting warnings.

"But at the end of the day, when I was fighting Lewis, I went outside of the track limits, so I think quite quickly the race director was onto us to tell me to give the position back to him and that's exactly what I did."

"Yeah, I think it's a difficult one," added Hamilton. "It was very confusing. Most tracks we're not allowed to put four wheels outside the white line but this weekend on that particular corner we weren't allowed to on Friday.

"In actual fact you could go two wheels outside the line but you can't go past the blue and white kerb, but in the race you can, and that is what had been written so going into the race then you can...

"But it's quite a different corner when you have to do one or the other in terms of approach, and it is faster when you can go out, but then whatever is the boundary when you are overtaking?

"You're not allowed to overtake off track but halfway through the race, they basically changed their minds and all of a sudden you're not allowed to go outside that white line, which is fine for me. It's actually... I think it's faster in the end for me, it helped me look after my tyres actually, so I'm grateful for the call and ultimately it meant that Max wasn't able to overtake off track."