Verstappen: I didn't have the tyres to attack anymore 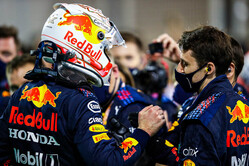 Max Verstappen admits that the reason he was unable to come back at Lewis Hamilton following his abortive Turn 4 move was because his tyres were no longer up to the job.

Having reeled his foe in lap by lap, on lap 53 Max Verstappen finally made his move, going around the outside of Lewis Hamilton in the notorious Turn 4.

However, having gained an advantage by exceeding the track limits the Dutchman was ordered to hand the position back.

Though the gap going into the last lap was under a second, over the course of those few laps that followed the Turn 4 move, fans were surprised the Dutchman didn't launch another sustained attack.

"It was super hard to follow," admitted the Red Bull driver at race end. "I got into Turn 13 and I had a big oversteer," he added, referring to a mistake much earlier, on lap 43, "and from there onwards I just didn't have the tyres anymore to attack.

"Of course my tyres were like ten or eleven laps younger," he continued, "but with these cars that advantage goes away very quickly once you get within one-and-a-half seconds. And with the wind and the direction it was, it was not helping."

Aside from controversy surrounding the whole Turn 4 thing, many wonder why Verstappen didn't seek a more opportune moment to hand the position back to his rival.

"If I would have let him by later then it's an unfair way of giving the position back," said Verstappen. "Because then you're so close and it's an easy DRS pass, so I had to do it after Turn 10.

"We definitely made good steps forward today," he added, "but of course it's a shame not to get the win.

"We were having to manage a couple of issues throughout the race which I had to drive around, so we will have to look into that but there are positives to take from today and the whole weekend.

"Mercedes did the undercut but we stuck to our strategy which was working fine," he insisted, "the problem is that with these cars, it's so hard to pass and once you have that track position it's pretty powerful.

"We have to look at the positives. We are taking the fight to Mercedes and I think that's great, it's good to start the season this way and we managed to score some good points for the team. We will analyse what we can do better as there are always things you can improve."