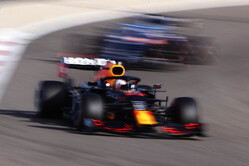 Heading into the season as 'favourites', Christian Horner admits that one of the reasons for Red Bull's significant step forward since last season was a correlation issue with the 2020 car.

With Ferrari all but out of the equation last year courtesy of the investigation into its 2019 power unit, the only possible threat to Mercedes domination came from Red Bull.

Traditionally, slow out of the box, it didn't augur well when neither Red Bull finished in the points in the season opener, Max Verstappen succumbing to an electrics issue just 11 laps into the race.

However, in the six races that followed, the Austrian team, which for several years, unlike Mercedes, has persisted with a controversial high rake approach, came back at its German rival, finally breaking its winning streak at Silverstone.

Nonetheless, over the course of the season Verstappen was unable to mount a sustained challenge, and by season end, Mercedes was enjoying its biggest winning margin since 2016.

While Alex Albon shouldered much of the blame for the Milton Keynes' outfit's 254 point deficit to Mercedes, Christian Horner has now admitted that correlation issues accounted for part of the team's weakness.

"Last year we really understood what some of our weaknesses were," he told Sky Sports, when asked about the difference heading into the 2021 season and last year. "We managed to understand what our tools were telling us as well, both the wind tunnel and CFD, and some of the correlation issues that we had in replicating what those tools were saying and what we were seeing on-track.

"Having understood that, the whole engineering team has worked incredibly hard over the winter," he added. "Hopefully we've got a good starting base that we can then build on through the season."

Indeed, having looked strong on pace and reliability in testing, the team continued to look good in all three practice sessions in Bahrain, Max Verstappen going on to take pole by 0.388s.

However, come race day, Red Bull was beaten on strategy, Verstappen's cause not helped by tyre strategy on Saturday which saw teammate, Sergio Perez qualify eleventh, and subsequently suffer a technical issue next day that left him starting from the pitlane, thereby leaving the Dutchman once again taking on the might of the Black Arrows single-handed.

Then again, is Red Bull actually making a rod for its own back in terms of creating a car that only suits one of its drivers?