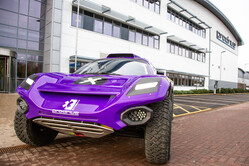 Prodrive is to partner with Lewis Hamilton's X44 Extreme E team, and will run the team at each round of the five-race series.

According to the official announcement; "X44 will take its followers on a journey of discovery, to show first-hand how human actions are damaging the planet, racing electric vehicles in five remote locations that are already damaged or severely under threat of climate change. The five locations will highlight a variety of serious climate issues including melting ice caps in Greenland, deforestation in Brazil, and rising sea levels in Senegal.

"Each X-Prix race weekend will include two days of all-action, short, sharp wheel-to-wheel racing, with world-class drivers and nine teams. Prodrive-contracted drivers Sebastien Loeb, and fellow Dakar competitor, Cristina Gutierrez, will compete in the X44 ODYSSEY 21. The bespoke E-SUV produces 400 kW (550 bhp) and is capable of reaching 100 kph in 4.5 seconds."

Loeb is arguably one of the greatest rally drivers of all time and a legend of the motorsport world, with a record nine World Rally Championships and 79 WRC wins to his name. He has also achieved three Race of Champions wins in which he competed against the world’s best racing and rally drivers.

Driving alongside Loeb will be Spanish driver Cristina Gutierrez. Gutierrez is a promising upcoming talent who made history in the 2017 Dakar Rally by becoming the first Spanish female driver to finish the race in the car category, finishing fifth place among the debutantes.

Widely known as the toughest rally in the world, Cristina has now finished the race five times, and her talents have been further showcased in her home country, where she previously secured a second-place overall position in the mixed-gender All-Terrain Spanish Rally Championships, finishing top of the female category between 2011 and 2016.

Prodrive is one of the most successful motorsport businesses in the world, and has won six World Rally Championship titles; six Le Mans titles; five British Touring Championships; and is the reigning FIA World Endurance Championship GT Manufacturers’ and Drivers’ champions with Aston Martin Racing.

"Extreme E is such an exciting and unique concept," said Prodrive chairman and founder, David Richards, "and I have been fascinated by the project ever since Alejandro launched it almost two years ago.

"When Lewis then announced his interest in a team it was a great opportunity for Prodrive to help him realise his personal ambitions from the series."