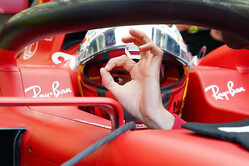 168 days on from the race held there on 1st November last year, Formula 1 is back at the Enzo e Dino Ferrari circuit in Imola for the second round of the 2021 season. The name of the race this time is the Gran Premio del Made in Italy e dell'Emilia-Romagna, in tribute to Italian excellence, with many of its products coming from the region which is home to the race track and also Ferrari, based just 90 kilometres away.

The current track layout now features a section of flat out acceleration from the exit of Rivazza 2 to the Tamburello chicane, with the Variante Bassa having been removed from the section which is also home to the only DRS zone. As was the case five months ago, regulations resulting from the Covid-19 pandemic mean the race will be held behind closed doors, so that unfortunately, the grandstands will not be packed with the Scuderia's home fans.

Last year, the race meeting was held over just two days on Saturday and Sunday, trialling a shorter format for possible future use. 2021 sees a return to two free practice sessions on Friday, this year's regulations reducing them from 90 to 60 minutes each. They start at 11 CET and 14.30. Qualifying is on Saturday at 14, preceded by the final hour of free practice at 11. This is the 29th time that Imola hosts a round of the World Championship and the race gets underway at 3pm on Sunday, with drivers tackling 63 laps of the 4.909 kilometre circuit, for a total distance of 309.049 kilometres.

3. The position of the "Made in Italy" brand in the world by reputation, according to a leading market research survey. The brand used for quality products made in Italy sits behind two American giants, the largest soft drinks producer on the planet and the world's leading credit card.

4+1. The number of homologated race tracks in Emilia-Romagna. The Enzo e Dino Ferrari circuit in Imola is the only one that has hosted Formula 1, this weekend's race being the 29th to count for the world championship. The others are, the Misano World Circuit Marco Simoncelli (4.226 kilometres), which regularly hosts MotoGP, the Riccardo Paletti circuit in Varano de' Melegari (2.360 km) built by Dallara and used mainly as a test track and a racing and safe driving school and the Modena circuit (2.007 km) opened in 2011, which is also used mainly as a driving school and for private use by drivers in their own cars. Then there's the Fiorano track, opened in 1972, privately owned by Ferrari. Its 2.976 km figure-of-eight layout has been home to the inaugural outing of all race and road cars built in Maranello for the past 49 years.

5. The furthest back on the grid from which the race has been won at Imola. It happened twice in the first two world championship rounds held at the Autodromo Enzo e Dino Ferrari. In both cases, Brazil's Nelson Piquet won for Brabham. In 1980 the race was the Italian Grand Prix and the following year came the inaugural San Marino Grand Prix. As for the lowest grid position to deliver a podium finish, that goes to Finland's JJ Lehto, who started 16th in his Dallara in the thrilling 1991 race and finished third. In 2005, Michael Schumacher finished second, behind rival Fernando Alonso, having started 13th.

96.9. The value in billions of dollars of Made in Italy in 2019, the last year unaffected by the Covid-19 pandemic, as estimated by BrandZ, which rates the Italian economy as seventh in the world.

This week in Ferrari history

14/4. Scuderia Ferrari notched up its 53rd one-two finish at Imola in the 2002 San Marino Grand Prix. The F2002 locked out the front row of the grid with Michael Schumacher just 64 thousandths of a second faster than Rubens Barrichello. The German champion was untouchable in the race, while in the number 2 car, the Brazilian held off Ralf Schumacher in the Williams to finish second. It was the first time that Ferrari drivers had stood on the top two steps of the podium since Didier Pironi and Gilles Villeneuve did so in 1982, in the race that would unfortunately be the Canadian's last.

15/4. In 2007, Felipe Massa took his third win with Scuderia Ferrari at the Bahrain Grand Prix. The Brazilian dominated in the F2007 right from qualifying and won without too much difficulty, an important result after a tricky start to the season. The other Ferrari driver, Kimi Raikkonen, finished third behind Lewis Hamilton.

16/4. In 2017, Charles Leclerc took the first of his seven Formula 2 wins. It came at Bahrain's Sakhir circuit, where the talented youngster fought his way into the lead from 14th place after a slow pit stop to change tyres. The Ferrari Driver Academy's Monegasque student really showed what he was made of. He would go on to clinch the title with the Prema team, well before the final round, before signing to drive for Sauber in Formula 1 in 2018.

17/4. Andrea Bertolini, a Scuderia Ferrari test driver for many years and also involved in the F1 Clienti programme, on this day in 2012 had a dream come true, when he was able to drive the 312 T4 raced by his hero, Gilles Villeneuve. During his career, Andrea so far carried out almost 500 tests and has driven more than thirty different Ferrari Formula 1 cars.

18/4. In 2017, Antonio Giovinazzi drove that year's Scuderia Ferrari car, the SF70H, when the man from Puglia took part in the first two days of testing following the Bahrain Grand Prix. He completed 93 laps, equivalent to over one and a half race distances and was second quickest with a 1:31.984.