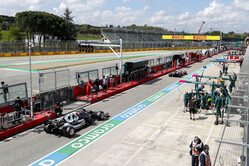 Mercedes was first and second fastest in both free practice sessions today. Valtteri Bottas topped the times on each occasion, setting the quickest time of the day on the P Zero Yellow medium this afternoon.

Conditions were slightly cooler than last year but similar from FP1 to FP2, with air temperatures around 15 degrees centigrade and track temperature that peaked at 25 degrees.

Although the teams raced at Imola last year, free practice in 2020 was condensed into one 90-minute session on Saturday morning.

The performance gaps between all three compounds are different to initial estimates. The gap between hard and medium is smaller than expected because the hard, although requiring a longer warm-up time, is then able to work well and provide a good level of grip. Between the soft and the medium the gap is instead bigger - because we were expecting lower track temperatures and general graining on the C4: not only on the long runs.

Mario Isola: "The conditions we had at Imola today were actually a little bit cooler than those we experienced six months ago in November. The tyres themselves performed well overall. We saw some graining during long runs on the soft C4 compound throughout both sessions. Imola is a medium severity track that doesn't put a lot of energy through the tyres, so in low track temperatures it's difficult to warm them up: especially the medium and hard compounds. By the afternoon, the track was already in quite good condition, despite there being very few support races. The gap between the compounds is lower than expected between hard and medium and higher than expected between medium and soft, although the difference can vary from team to team. This will naturally influence strategies".