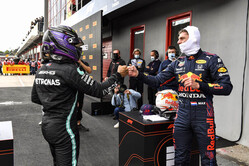 A total of five cars used the P Zero Yellow medium tyre in the decisive Q2 session, which determines the starting tyres for the grid, with both Mercedes and the Red Bull of Max Verstappen using it to set their best times. The two Williams drivers also used the medium, but qualified out of the top 10. The other seven in the top 10 of the grid will start on the P Zero Red soft tyre tomorrow. As usual, everyone else from P11 downwards has a free choice of tyres.

With Hamilton starting from pole and Verstappen starting third, two of the top three will start using the medium tyre on the rubbered-in 'clean' side of the track: with the other Red Bull of Sergio Perez in between them on soft rubber but starting on the 'dirty' side.

Although conditions at Imola have been consistently cool in free practice, track temperatures became warmer during qualifying to peak at more than 30 degrees centigrade. Cool conditions similar to Friday are expected tomorrow, as well as the risk of rain.

Mercedes driver Lewis Hamilton set the fastest time of the weekend so far (on his first Q3 run) while McLaren's Lando Norris had a front-row time deleted due to a track limits infringement.

The 63-lap race is almost certain to be a one-stopper for most drivers, for three main reasons. Firstly, it's hard to overtake around the narrow confines of Imola; secondly, the pit lane time loss is high at nearly half a minute; thirdly, the wear and degradation on the tyres is reasonably low.

A two-stopper will definitely be slower, so the teams will look to avoid that if possible. Track position is key and steering clear of traffic is important, so the timing of the stop will be critical. An advantage can often be gained by 'undercutting' direct rivals, so the selected strategy has to consider this as well.

Mario Isola: "All the tyres selected for qualifying performed well today. As expected, we saw some of the frontrunners choose to get through Q2 and therefore start the race on the medium tyre. This should allow them to have a longer opening stint and a more flexible strategy. There are a number of question marks tomorrow, including the weather, with the possibility of rain that could entirely subvert the predicted strategies. If it stays dry, we've seen so far that all three compounds should have an important role to play in the race. Those starting on the soft tyre don't face a particular disadvantage however, as Imola is a low-severity circuit for tyres and weather conditions are expected to be cool."