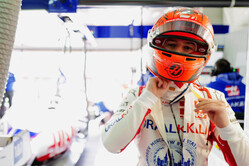 While it is customary for drivers to allow one another space ahead of their flying laps, Mazepin, who had had several lap times deleted for exceeding track limits, overtook Giovinazzi in order to attempt another lap, thereby compromising the Italian's final run. Ironically, the Russian, who has earned the soubriquet 'Maze-spin' - amongst others - made a mistake which destroyed his own lap.

"What is Mazepin doing, honestly?" shouted Giovinazzi over his radio.

Speaking after the session, the Italian said Mazepin appears to have no regard for the gentlemen's agreements by which drivers usually abide.

"It's quite clear," he said. "We respect each other on this, starting the lap, and he didn't respect this.

"This is really not correct for a qualifying lap," he added. "I didn't make my last lap."

"In F1 it is a bit difficult as there's 20 cars, obviously, in segment one, which is where we are," the Russian subsequently responded. "Everyone is going out at the same time, and the track is just not big enough for all of us.

"We had this chat about the gentlemen's agreement, and obviously I didn't have a problem with that," he continued. "But when there is three seconds on the clock, it is either you go or you have to box, and you're going across the start-finish first.

"We are not doing it on purpose," insisted Haas team boss, Guenther Steiner, "but it is getting very busy at the end of the session in sessions like this. So you just have to go and hope for the best, because if you don't go, you lose the lap anyway.

"I don't think you can call this a gentlemen's agreement because Antonio could have gone faster as well," he added, "he knew that Nikita was behind him and needed to make the chequered flag or could miss the chequered flag.

"So it's unfortunate, no-one's doing this on purpose or anything, but it's racing and if you are here racing, you need to try to take every opportunity you have got."

Earlier in the weekend, Steiner admitted that Mazepin, who has had numerous spins over the course of his first two weekends, as well as crashing on the first lap in Bahrain and in the pitlane on Friday, is perhaps pushing too hard.

"At some stage, they need to be reduced," admitted the Italian, "but he's trying very hard for that... and I guess he's trying sometimes a little bit too hard.

"He needs to find that limit," he continued. "But that's for him to find, not us. We can help him in doing that, but it's one of these things that I've said before: learning is painful. It comes with pain, but at some stage that will hopefully stop and he will be in a good place.

"In Bahrain, I would say that he had to learn also the wind conditions, and in Bahrain they were very rough. Our car was already last year very bad in wind conditions, so just to understand that, that caused a few spins, and Mick had one in the race as well.

"Obviously, we're not planning to spin the car," he added, "but on the other side it's part of the learning. So I don't want to put a number or time on anything of this. This will sort itself out in my opinion."

Asked, ahead of his FP2 crash, if the Russian is struggling, Steiner insisted that it is too early to begin drawing conclusions.

"I think we jump to a conclusion too early," he said. "We are in our second FP1 this season, so to judge somebody on this, it's a little bit early. But for sure in Bahrain he had a few spins.

"Maybe F2 to F1 is still a difficult step," he added, "but Bahrain was very difficult conditions as well. And him driving the Mercedes last year? I think he learned something.

"But also he has to learn our car is not as good as a Mercedes. I mean, I'm very open about that one. I'm not trying to hide that. For sure the Mercedes is a little bit less temperamental than our car.