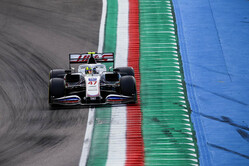 FP1 saw Mazepin and Schumacher run identical tire strategies. Both commenced the session on the Pirelli P Zero Yellow medium rubber. With wake-up runs banked, Mazepin logging 14 laps to Schumacher on 9, next on the plan was a switch to new sets of the P Zero Red soft rubber. An ill-timed red flag stop, for the stricken cars of Sergio Perez and Esteban Ocon, consumed valuable track time leaving Mazepin and Schumacher just one outing on the soft compound. Mazepin set a fastest lap of 1:18.823 - good for 18th overall, before a last lap spin exiting the final turn, and subsequent contact with the barrier, produced a second red flag in the final minute. Schumacher ended his morning outing 19th overall, his best lap of the session a 1:19.480 on his nine-lap run on the soft compound.

Schumacher was first out the garage in FP2 sampling the P Zero White hard tire. He followed that up with a stint on new softs - clocking his quickest lap of the session with a 1:17.350, which would place him 19th on the timesheet. The reigning F2 champion completed his run session with a short high-fuel stint on the medium compound. A precautionary gearbox change on Mazepin's VF-21, following his off in FP1, meant the rookie joined FP2 with 20 minutes off the clock. A brief stint on medium tires was followed by a switch to softs for an eight-lap run. Mazepin's best lap was a 1:17.857 for 20th overall. He ended Friday's track running with a high-fuel outing on the hard tires.

Nikita Mazepin: "I think we had a positive day - I really learned a lot about the car. I think I made another very good step forward with the team in terms of understanding what car I want to drive. I had a good lap time in FP1, it was a good quali simulation, I was happy with it. I then made a mistake which there was no coming back from, but overall, it was a positive FP1 and then FP2. I'm not leaving anything on the table out there. I wouldn't want to go to sleep thinking I've left some time out there. There's a balance of course, which I haven't mastered yet, but we have time. All eyes are on FP3 now - the weekend progresses and I have to keep progressing with it as well."

Mick Schumacher: "It was fun, it felt great out there today. The track didn't change much from 2016, so that was a positive. In terms of feeling and in terms of fun, it was definitely similar to my last visit here back then. The colder conditions today meant we could push a lot more consecutively, which has positives and also negatives. The negative just being it's a cold temperature and it takes ages to warm up the tires. Sometimes even in the long runs its hard to get the temperatures in there and to keep them there is even harder. As a positive it means a lot of laps so I can try a lot of things straight away, especially on the C2 tire. I was really able to find out the limit especially in FP2 and improve with each lap on the C4. The first lap was a warm-up then we went through the run and improved with each lap. For now, we're quite happy but it only really counts in qualifying."

Guenther Steiner: "Not an unsuccessful FP1 and FP2. We had a few small bumps during the sessions but overall, I think our learning process with the drivers continues - we're making steps forward. We're getting faster, it's not consistent faster, but improvements are being made. Obviously, Nikita (Mazepin) had a spin on his last lap, and it was on a pretty quick lap - a very fast lap, but he went off on the last corner. It was not ideal, and we lost some time in FP2 with him as we changed his gearbox just as a precaution and to check it out. When you do that you're out of sync with other cars in FP2 and then your tires get cold and it's a downhill spiral. So, that's why his FP2 wasn't ideal. Mick (Schumacher) overall did a good job to get the most out of his laps during the two hours of running he had today."