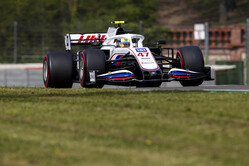 Mazepin and Schumacher exited qualifying at the checkered in Q1 having had three timed runs on new sets of Pirelli's P Zero Red soft tires. Both cars were first on-track to start the session, Schumacher recording a 1:16.806 lap on his first outing with Mazepin logging a 1:17:806. The afternoon's early running was brought to a brief halt thanks to a red flag with fellow rookie Yuki Tsunoda making contact with the barriers in his AlphaTauri. When the action resumed Schumacher posted a 1:16.348 on his second tour followed by a 1:16.279 on his third and final set of softs. Mazepin ultimately set his fastest lap, a 1:16.797, on his second set of tires.

Nikita Mazepin: "These qualifying sessions don't fail to throw something new at you. Before we go out, we obviously expect to have a clean session, we have our run plan and we expect to manage our time, and then something happens early on and you've suddenly got less time. The stress element comes in brings the excitement. It was difficult to get the optimum lap time out there as this track was very cold today and it was important to build the tire temperatures. To do that, you need to go fast, and obviously other cars were slowing down. Loads happened but it's an upward curve so far in my career, so I'm happy about that. I think we're extracting the most there is for now in the car and building a good foundation."

Mick Schumacher: "I was pushing a lot more, but unfortunately I lost out at the Variante Alta chicane - I think there was another one or two tenths in it really. But the good thing is we know we can improve, we're not yet at the end. We saw improvement from Bahrain, so I'm really happy seeing that for us. We'll wait and see what happens tomorrow in the race - long runs are always a different game really. It's hard to predict what's been happening through the free practices, everyone's trying different things and set-ups. I'm mindful of how Bahrain went, so I'll take that into consideration this weekend. I'm just looking forward to driving again tomorrow."

Guenther Steiner: "Even if the result doesn't look great, I think we've made good progress this weekend. FP3 was pretty good. I think everything is settling down a little bit. Qualifying, obviously, we finished 18th and 19th, but nevertheless we weren't too far off the cars ahead of us - which is encouraging. Compared to Bahrain we saw that we made progress because, I wouldn't say this one was a confusing qualifying session, but it was quite eventful with things like the red flag and so on. After that had happened the guys adapted pretty well and got on with their job. This is all about gaining experience and the next time it will be even better. At the moment they're getting a lot of experience with different situations, all of which they need to have - they'll be better prepared as a result of having gone through these things."