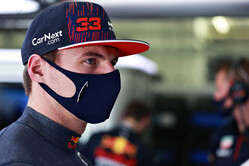 Max is just one point off the lead in the Drivers' Championship entering this race, but he has led the most laps this season. Max has led 90 laps in 2021 compared to Lewis Hamilton's 29 so far.

Despite only being 23 years old, Max's 44th career podium in the Emilia Romagna Grand Prix moved him ahead of Sir Jackie Stewart on the all-time table. Having now won 11 career races, he is still one month younger than Michael Schumacher when he won his first F1 race at the 1992 Belgian GP.

Sergio Perez started a Grand Prix from the front row for the first time in his career at Imola, setting a new Formula One record for longest career before doing so, it was his 193rd start.

Sergio and Max put two Honda-powered Red Bulls in the top three on the grid at Imola. This weekend they are seeking to give Honda their first front row lockout as a power unit supplier since Ayrton Senna and Gerhard Berger at the 1991 Australian Grand Prix.

Max's win in Italy was the first Honda powered win in Imola since Ayrton Senna 30 years ago.

You said a small mistake cost you pole position in Imola. How did it feel to qualify on the front row?
Sergio Perez: I was very pleased with my progression after qualifying on the front row at Imola. I think I even surprised myself to be that quick in only my second race weekend at Red Bull, and to be able to extract the maximum from the car in such a short amount of time. Looking back at it, I think being able to adapt to such a different car and driving style definitely gives me a big confidence boost and it showed me I can adapt well. I am starting to understand the car and that was the main positive.

How motivated is everyone in the Team knowing how competitive the RB16B is?
SP: The motivation is sky high. The way we work at Red Bull, we prepare our race weekend to take the maximum from it because we know if we do everything right we have a realistic chance of winning the race. Everyone in the Team is also pushing really hard to try to improve the RB16B so we can maximise every single weekend with both cars - that's the target. Imola was a missed opportunity as I think we should have finished 1-2 but hopefully we can achieve that this weekend.

What are the Team hoping for at the next round in Portugal?
SP: Imola is a pretty tough track to get on top of and maximise, especially if you've recently swapped teams, but in Portugal I hope to be in the mix and get everything out of the car. We know what the car is capable of and the goal is to deliver on its potential. The positive is that the pace is there, we just need to continue building on our form and take another step forwards.

It takes time getting to grips with a new car. What is the process behind it?
SP: It's just time in the car. Obviously the more work you put in, the more you get out, so I analyse, I make notes, I speak to the engineers and I watch back footage. Everything you do just helps get you as ready as possible. You can see with everyone that has changed teams this year, it takes time to get up to speed. Everyone is good, everyone is exceptionally fast, it's just a process you need to go through before everything comes to you naturally and hopefully we can achieve that in the opening races of the season.

The next races in Portugal and Spain are the first back to back weekends of the season. What are your thoughts heading to the Algarve?
SP: Portugal is a great place to go racing. It's fairly new to the calendar and last year was tricky with the new asphalt so it will be interesting to see how it is this year in terms of grip but certainly I think it's a good track. It's the first back to back of the season and races are coming thick and fast now so it will be important to be on it!

Max, you had a brilliant win in Imola, how did it feel to get that victory?
Max Verstappen: It was of course great to win, after missing out in Bahrain it felt very satisfying to win the race in Imola. There were definitely a few things that we wanted to learn from the Bahrain race, which we did, and we could bring home the win. We also know that it's a very long season, so we just have to stay very focussed and I am always looking ahead, Imola wasn't perfect so we have to keep pushing.

Talk us through your race start and the run to Turn 1.
MV: It's always tricky to know what's going to happen but it felt like I had a good launch, I didn't maximise performance on the Saturday so it definitely felt good to lead the race from Turn 1. I'm happy with what we have with the RB16B, it's faster, it has more grip and better balance. We lost downforce with the floor, but I think we lost a bit less than other teams and it shows that we made a good step forward. We're starting the season strong, the best we've had since I've been with the Team. It's a long season, and if we want to fight for the championship, we have to keep improving.

Looking ahead to Portugal, are you excited to go back?
MV: I am looking forward to going back to Portugal, we were on the podium there last year and I think we have a better car now so I'm looking forward to extracting everything we can from the car and have a bit of fun out there. Every race weekend so far, we've really felt that there is a chance to win, it feels like a different mindset now when you know you can fight for pole. We've definitely learnt a lot over the years, I'm very excited to see what is ahead of us. It won't be easy but we are going to do everything we can to stay in the fight this season.