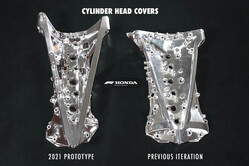 Having announced its decision to leave F1 at the end of this season, Honda opted to bring its final (2022) power unit forward a year, and from the outset it has proved a significant step forward, powering Max Verstappen to pole in Bahrain and the top step of the podium at Imola.

With Red Bull taking over Honda's programme from next season, the RA621H is the last power unit produced by Honda itself, and ahead of the third round of the season, the Japanese manufacturer's head of power unit development, Yasuaki Asaki gives insight into the potential championship winner.

"The original plan was to implement this new structure PU this year in 2021," Asaki explains. "But then for a variety of reasons, it was decided not to proceed with a brand new PU.

"However, the thinking on this really changed when Honda announced that we would be leaving the sport. I went to President Hachigo, and said to him that we would really like to implement this new structure PU for our last year in the sport. And he kindly accepted that request.

"With the green light given, our engineers got to work on trying to get everything ready for the new season. That was never going to be an easy task, given the scope of the changes being made to the power unit’s architecture.

We've also had to make the head cover lower and more compact, which means that the way that air flows over it has become a lot better. And we've also lowered the centre of gravity of the ICE.

"Another thing we changed is the bore pitch, by reducing the distance between one bore and the next, we've made the engine itself shorter, smaller.

"You'll appreciate this is a completely new engine. And we've been able to bring it to a point where in just six months we've taken it testing without any issues.

"Another point that we've had to think about is the fact that combustion efficiency has go better," he admits. "And the camshaft output has got better.

"Due to the rules of physics the amount of energy that can be stored has changed and it meant that the amount of exhaust energy has decreased. So compared to the recovery that we were getting last year, what we're having to do is increase the amount of crankshaft output, and at the same time ensure that there's a good level of exhaust output, exhaust temperature as well.

"So we've had a number of different development objectives and we believe we have met them."

Despite the extremely limited timeframe, Asaki says his team was able to ensure that all the significant developments were included in the new design.

"I believe that we were able to implement everything that we have to in order to compete with Mercedes. We had a lot of cooperation from Red Bull, making sure that we could get the most from this new compact engine. Until the summer we were woking on the basis that it was going to be the previous bigger engine.

"This is the first time that we’ve gone as far as changing the structure of the PU itself. But I think the biggest challenge that we’ve had up to this point was back in the McLaren days, when we made big changes to the MGU-H, we changed the positioning of the compressor and turbine in relation to the V bank - I think the biggest challenges were back then.

"You may be aware that a part of what helped us solve those problems back then was the cooperation with Honda Jet. As I mentioned Honda Motor has helped us with various different points, but one of the points I’d like to mention is a cylinder sleeve plating, produced by our plant in Kumamoto - it’s called the Kumamoto plating. The Kumamoto plant is actually a motorbike factory, but within Honda there’s a substantial amount of collaboration between the two-wheel production and four-wheel production areas.

"I have acknowledged in some ways that it was an incredibly challenging target," he concludes. "But I think our engineers have had both the understanding that, yes we’ve only got a year left, but also we’ve got a full year left and we have to do something with that time, and they’ve worked hard during the time that we have had."