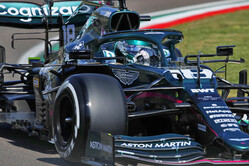 Red Bull boss, Christian Horner admits surprise at Aston Martin calling for a revision of the 2021 aero rules after just one race, describing the move as "naive".

The Briton was reacting to Otmar Szafnauer's admission that legal action could follow if the rules introduced this season, allegedly influenced by F1 bosses, and in the name of safety, are not revised.

In a bid to limit downforce in the final season before the rules overhaul for 2022, the FIA mandated changes to the floor, diffuser and brake ducts that have impacted the performance of those cars running low rake, such as Mercedes and Aston Martin.

Speaking in Bahrain, Mercedes boss, Toto Wolff said: "I think we've probably suffered more with the change of regulations than the cars with the higher rake," said the Austrian, a claim confirmed by Szafnauer.

Aware that it doesn't have the resources of Mercedes and that it will therefore spend the entire season playing catch-up, a situation not helped by the impending switch of focus to 2022, Aston Martin is calling for the rules to be revised... even though the season is just one race old.

"We had a sample of one, that Mercedes won with what we classify a low-rake car," he told Sky Sports. "They had absolutely equal, if not maybe better, tyre degradation than we had in Bahrain. They've looked mighty impressive here and we've only run at one circuit so far.

"When there was a front wing change a few years ago it really hurt us," he added. "We voted against it, but you just have to accept it.

"It seems a little naive to think that suddenly the rules are going to get changed after the sample of a single race after the process has been fully followed. I'm struggling to get my head around that."

Indeed, rules can only be changed 'mid-season' in the interests of safety, which is ostensibly why the 2021 rules were introduced - and voted for - in the first place.

"Whether it was blown diffusers, double diffusers, flexing wings, non-flexing wings, F-ducts, front wing regulations... as I mentioned just a couple of years ago, it's part of Formula 1," said Horner. "Regulations evolve and change and you've got to swing with those punches... that is F1.

"We've got a big regulation change for next year, but the teams have known that. That's been part of the sport for many, many years."