Put a wall there or gravel, says Verstappen 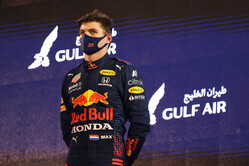 Max Verstappen echoes the views of fans as he argues that track limits controversy could be resolved by returning to gravel traps.

Understandably, one of the main talking points at today's press conference at Imola was the Dutchman's defeat in the opening race despite having, arguably, the best car.

However, Verstappen and his team snatched defeat from the face of victory courtesy of a combination of Mercedes superior strategy and a move on the world champion that saw the Dutchman forced to hand back the position after exceeding the track limits in the process.

As the row over the inconsistent policing of track limits continues, fans argue that in the absence of physical limits - such as the walls of Monaco and Azerbaijan - other than returning to gravel traps which have been phased out over the years, the sport should either scrap limits entirely or rule that any part of the car going over the white line results in a penalty.

Speaking at today's press conference, Verstappen was in no doubt in terms of which camp he is in.

"Things can be easily resolved if you just put a wall there or gravel, it would help a lot," he said. "In qualifying we had to stay on the kerb, so that is also what I was doing in the race, to be clean, but then I heard that Lewis was just going wide, so I did it for two laps, but then I was not allowed to do it anymore.

"I don't think you should be able to change it through the race," he continued. "Either you can go wide, or not.

"I can understand of course with my overtake outside of the track limits that that's not allowed, so that's fine," he added. "But if you cannot gain an advantage by going wide overtaking, why are you allowed to do it on your own? That is what I think is not correct.

"We will talk about that with the drivers and also with (race director) Michael (Masi) about it, and we'll see what comes out of it," said the Dutchman. "I think it was a little bit messy in the race. I think everything before that was very strict, and I think good, how we handled everything.

"But definitely in the race, I think for thirty laps or something, Lewis was going wide, and you gain time there. I tried it for two laps, and then they told me not to, so it's a bit odd.

"About my overtake and whatever... I think yeah, that was fully understandable," he admitted.