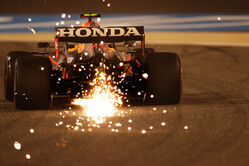 Indeed, but for the first lap clash with Daniel Ricciardo, Pierre Gasly, who qualified a mightily impressive fifth, having been on the pace all weekend, would have almost certainly been 'up there' giving Honda four drivers in the top ten.

Aware that it is leaving at season end, Honda brought forward its all-new power unit originally intended for 2022, and the smaller, more powerful unit has impressed from the outset of pre-season testing, in terms of pace and reliability.

Furthermore, Max Verstappen posted the fastest time of the test, ahead of Yuki Tsunoda, while Gasly completed the most mileage of all the drivers on duty.

"I must say Honda did a fantastic job in Sakura," says Tost, "because this new power unit is much more powerful and better drivable as it was in the past.

"I think that Honda is really very, very close to Mercedes," he adds, "and I can only say thank you to the Japanese engineers, because they did a fantastic job."

Reflecting on hjis team, Tost says: "We improved in every aspect, but we must not forget our competitors... if you look to McLaren, they have the Mercedes power unit, they are very strong.

"For me, currently, Red Bull, Mercedes are on the same level," he continues, "maybe Red Bull is even faster. Then I see McLaren coming. And we see then what's going on with Ferrari. But we are close to Ferrari and to the rest.

"It's a question of hundredths of a second," he believes. "We improved but the others improved as well. The question is now who did a better job? And this I can answer at the end of the season.

"I need two, three races to get a better picture," he admits. "But it's very tight and I think it will be the same game as last year.

"I expect the same for Imola. We will then see what's going on in Portimao. But generally speaking the car is fast, hopefully also reliable, and we have a strong package together.

"The team is becoming more experienced now. We fortunately didn't have any fluctuation from the engineering side, which is very important, and also on the operational side we have a strong crew together now.

"And we have two real fast drivers. Pierre, with more experience, and Yuki as a newcomer, as a rookie, but I think that he is learning fast and this combination should help us to bring together a more competitive package as it was last year."

Tost will be delighted to know that Honda isn't taking anything for granted, and is already looking at ways to up the ante in the battle with Mercedes.

"We will review and consider this data," says the Japanese manufacturer's F1 technical director, Toyoharu Tanabe. "We need to see how much the power unit has been exhausted in this race, and we will then use it according to the characteristics of each circuit in the future.

"We plan to verify whether this usage was optimal," he adds. "Basically, I think that it can be used without problems, but I plan to think about what I should do to use it properly in the future.

"Last year, we were only able to win when everything went well. In terms of the difference with Mercedes, I think this year we are in a better position."